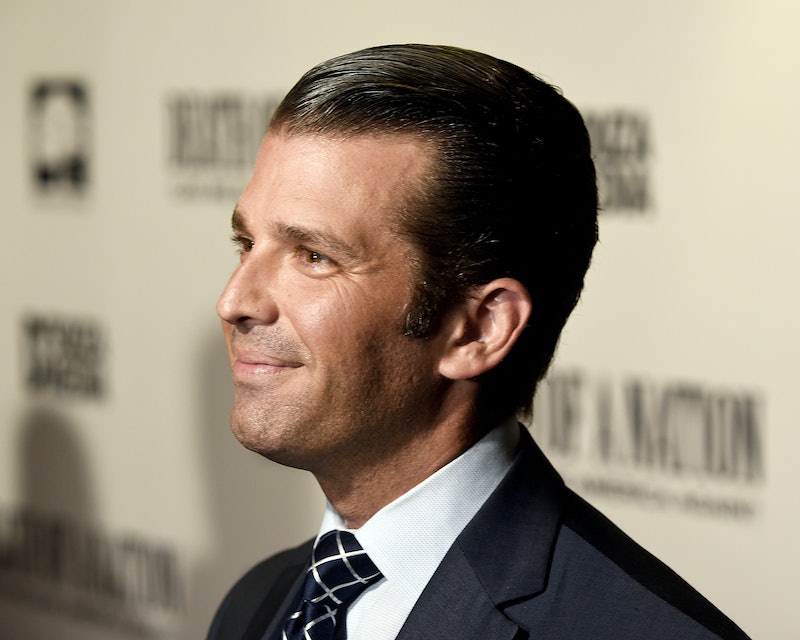 Shortly after Massachusetts Sen. Elizabeth Warren officially announced her 2020 campaign for president in Lawrence, Massachusetts, President Trump took to Twitter to mock her past claims that she has Native American Heritage. He finished his tweet off with "See you on the campaign TRAIL, Liz!," which many people think was a reference to the Trail of Tears, which resulted in the deaths of thousands of Native Americans. In an Instagram post, Donald Trump Jr. responded with "Savage!!! Love my president" — using a word that many Indigenous people now consider a slur. Bustle has reached out to the White House and the Trump Organization for comment.

The president has sparred with Warren in the past over her distant Native American ancestors. On Saturday, he continued his criticism, writing on Twitter:

Today Elizabeth Warren, sometimes referred to by me as Pocahontas, joined the race for President. Will she run as our first Native American presidential candidate, or has she decided that after 32 years, this is not playing so well anymore? See you on the campaign TRAIL, Liz!

Many Twitter users wrote that Trump's capitalization of the word "trail" indicated that he was making a joke about the Trial of Tears. Senior writer for Rolling Stone Jamil Smith wrote,

I try to never dignify this man’s tweets, but there is little doubt here that he uses “TRAIL” to evoke the genocidal Trail of Tears, and does so to land a political jab. Warren has taken justifiable heat on this issue—but he used the murders of Indigenous people as a punchline.

In the 1830s, the federal government forced 125,000 Native American people to leave their ancestral lands in the southeastern United States so that they could give the land to white settlers, according to History.com. They had to travel thousands of miles and across the Mississippi River to get to what the government deemed "Indian territory" — that journey is known as the Trail of Tears, and at least 5,000 Cherokee died because of it, according to History.com.

Not only did Trump Jr. appear to approve of a joke about Native American genocide, he also used the word "savage," which Dragos Nica wrote was previously "used to dehumanize Indigenous peoples and to advance and normalize their erasure from this land," according to The Establishment. Nica noted that Thomas Jefferson wrote about "merciless Indian savages," and the language has persisted: "Savage" has been used in U.S. Supreme Court cases about Indigenous rights and was used to justify the existence of boarding schools "constructed to eradicate the language, customs, beliefs, and bonds of Indigenous peoples" in the late 1800s.

The word "savage," Nica wrote, has been used for centuries "to cast Indigenous peoples as less than human in order to make it easier to justify abuses against them."

People also commented on Trump Jr.'s Instagram. One user wrote, "Bro is this real? This is a legit racist comment. He emphasized the word trail, anyone ever hear of the trail of tears? WTF? The genocide of Native Americans?? And the president makes light of that very dark history in a political attack??"

Another wrote, "I guess when you’re joking about the genocide of minorities it’s funny?"

It's worth noting that Trump Jr. used different language on Twitter. Rather than "savage," Trump Jr. said "Amazing " in response to his dad's tweet.