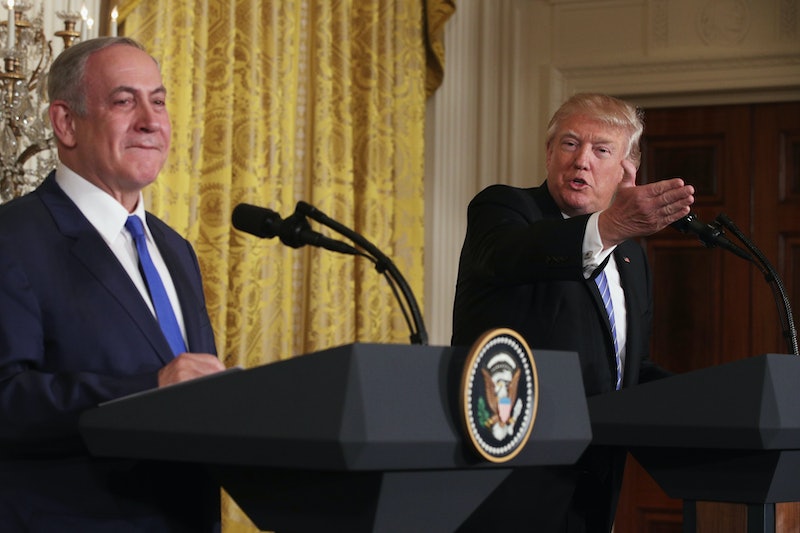 During a press conference with Israeli Prime Minister Benjamin Netanyahu, President Donald Trump said he was open to more options than a two-state solution to the Middle East peace crisis. “I’m looking at two states and one state,” Trump said. “I like the one that both parties like. I can live with either one.”

Under Barack Obama and George W. Bush, the United States showed support for a two-state solution. Trump's comments suggest the United States' stance could potentially change. “I think we’re going to make a deal. It might be a better deal than people in this room understand,” Trump said.

It has not always been clear to discern Trump's views on Israel and the Middle East peace process. For example, Trump has said he wants to move the U.S. embassy in Tel Aviv to Jerusalem, the capital of Israel. The move is seen as controversial because there is fear that Palestinians would be outraged by it. Jerusalem was formerly divided between Israel and Jordan, with the west controlled by the former and the east controlled by the latter. During the Six Day war, Israel won control of the entire city, but Palestinians claim control of the east is still. However, the embassy, should it be moved, would be in the western part which has long ben recognized as Israel's.

While the embassy move has suggested to some that Trump would take a hardline stance in support of Israel (though Bill Clinton and George W. Bush also voiced support for an embassy move), Trump has also been critical of Israeli settlements. Earlier this month, Trump said “I am not somebody that believes that going forward with these settlements is a good thing for peace."

Many analysts point to his son-in-law and adviser, Jared Kushner, who was raised as an Orthodox Jew and has a history of showing strong support for Israel. “He certainly believed that a strong and secure Israel was in America and the world’s best interest," Rabbi Hirschy Zarchi of Harvard Chabad, who knew Kushner in college, told the New York Times.

Wanting a "strong and secure Israel," though has also been the United States policy — or at least ostensibly has. Many critics, including Kushner, lost faith in Obama over his icy relationship with Netanyahu, and Kushner supported Mitt Romney over him in 2012. In January, during the last days of his presidency, Obama was sharply criticized by Congress, including by many of his fellow Democrats, for breaking with the traditional U.S. policy at the United Nations and abstaining from blocking a resolution — which many analysts felt was one-sided— censuring Israel. Democratic Rep. Eliot Engel, the ranking member on the House Foreign Affairs Committee, co-sponsored the resolution criticizing the Obama administration.