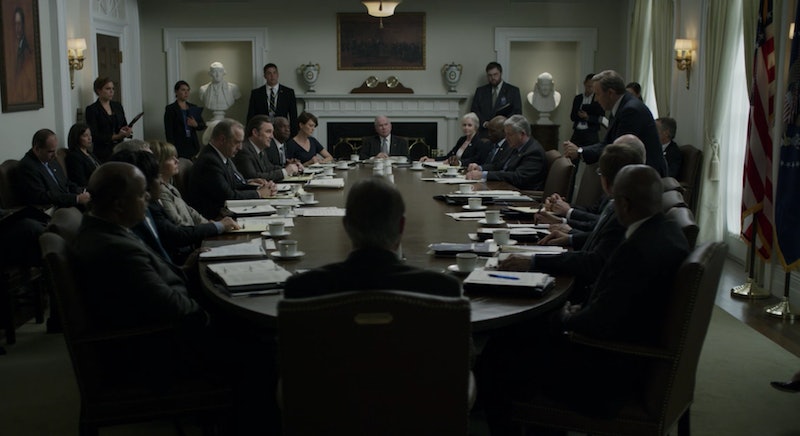 Three weeks into the partial government shutdown, President Trump is reportedly considering almost any way he can get his wall on the southern border funded. The most recent report from The New York Times indicated that to build the wall, Trump may use money meant for hurricane and wildfire disaster relief. If this sounds familiar to you — or just plain "whoa" — consider this: It's nearly identical to a plot point in House of Cards Season 3.

During the third season of the Netflix show, President Frank Underwood (played by Kevin Spacey, who was cut from the show amid allegations of sexual harassment and attempted assault, which he denied), made a power play to move forward with a program no one in Congress wanted to fund. Underwood declared a state of emergency in Washington D.C. in order to use money from the FEMA Disaster Relief Fund to create his America Works program — despite it being hurricane season. He claimed that unemployment constituted such an emergency, and that his program would give every American a job if they wanted one.

Compare that fictional scenario to what's happening in the United States right now. Trump has made clear that he's considering declaring a national emergency to fund the wall, claiming there is a crisis at the border. Anonymous congressional and Defense Department officials told The Times that the Trump administration had asked the Army Corps of Engineers to look into whether it can divert $13.9 billion that had been allocated for natural disaster projects, but hasn't been used yet, to building the wall. Bustle has reached out to the White House for comment.

In real life, like in House of Cards, Congress is likely to push back on the president's ability to declare an emergency just to get something he wants, but that no one will give him. Quartz reported that members of Congress are already preparing a bipartisan challenge if he goes through with it.

In the Netflix show, Congress tried to amend the Robert T. Stafford Disaster Relief and Emergency Assistance Act, which outlines how the president can use federal assistance to "save lives and to protect property and public health and safety or avert the threat of a catastrophe," to end Underwood's state of emergency. The Stafford Act has also come up in the news about Trump potentially declaring a national emergency. The Times reported that a senior official believes if the president tried to skirt Congress and use Army Corps money to begin constructing a wall, it would be subject to restrictions under that law.

The president in House of Cards eventually backpedaled on the use of FEMA funds, as a hurricane was barreling toward the coast and there was immense pressure on him to ensure the agency had the money it needed to adequately respond to the potential devastation. The catch was that the hurricane ended up changing paths and missing the United States after Underwood had signed the agreement, meaning it was all for nothing. The irony!

It's unlikely that the current IRL situation in Washington would be tied up so neatly. It's more likely that if Trump declared an emergency and used Army Corps funds, he would see legal challenges. And if both Trump and Democratic members of Congress hold strong in their convictions, the country will continue in this state of limbo that is the government shutdown.

More like this
Think Your Partner Is Cheating? These Tarot Cards May Confirm Your Suspicions
By Kristine Fellizar
Romance Authors Are Mobilizing For Reproductive Rights
By Natalia Perez-Gonzalez
New Coins Unveiled As King Charles III's Reign Gets Underway
By Sam Ramsden
Here’s Everything You Need To Know About Operation London Bridge
By Bustle UK
Get Even More From Bustle — Sign Up For The Newsletter