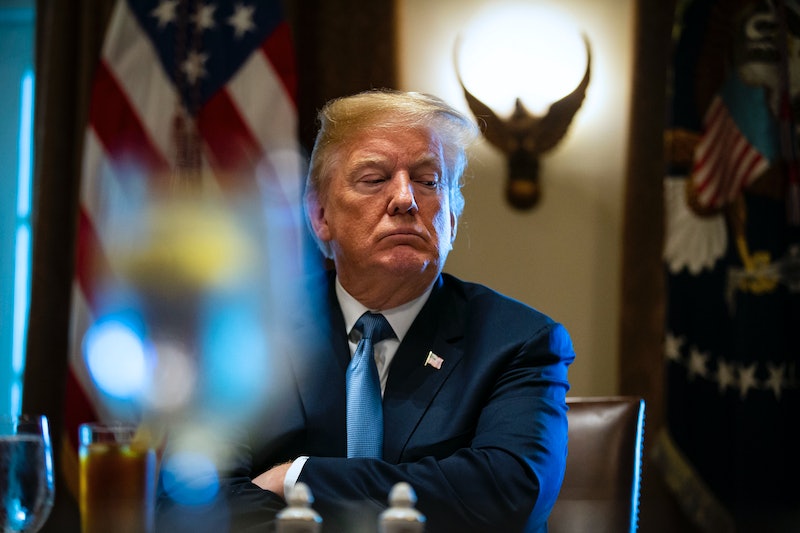 In the latest move to police migration at the southern border, the Trump administration is considering another travel ban-like policy, according to a report released Friday by the The San Francisco Chronicle. The proposal could take the form an executive action, but has not been finalized, according to the newspaper.

"The administration is considering a wide range of administrative, legal and legislative options to address the Democrat-created crisis of mass illegal immigration. No decisions have been made at this time. Nor will we forecast to smugglers or caravans what precise strategies will or will not be deployed," an anonymous White House official told The San Francisco Chronicle.

Homeland Security Secretary Kirstjen Nielsen told the Chronicle that the administration is not leaving any possibility off the table — including potentially limiting who can apply for legal asylum in the United States. Any potential change of policy will be announced "in the days to come," she said.

According to the Chronicle's sources, the policy has two potential steps. The Departments of Homeland Security and Justice would put forth a rule to limit the ability to seek asylum by people from a barred population. As the newspaper explained, this would then allow the president to bar specific populations, such as the Central American migrants in a caravan slowly making their way through Mexico, from entering the country.

Nielsen told the Chronicle they are "looking at every possible way within the legal construct we have" to limit the number of immigrants crossing the southern border. "Everything is on the table," Nielsen said on Friday during a visit to a town near the Mexican border, according to the newspaper.

The idea for this new plan is grounded in the temporary travel ban, which was originally issued in January 2017 — days after Trump took office. The original travel ban stopped people coming from seven majority-Muslim countries for 90 days — Iran, Iraq, Syria, Yemen, Somalia, Sudan and Libya — according to the BBC.

The policy announcement spurred massive protests at airports around the country, including New York City's John F. Kennedy International Airport. The first version of the the travel ban was blocked by federal courts.

In March 2017, the administration unveiled a revised travel ban order. The Supreme Court upheld parts of the ban, allowing it to take partial effect, according to The New York Times. Then in September 2017, the ban was extended to include travelers from North Korea, Chad, and Venezuela, but it dropped Sudan, according to The Guardian.

But the new proposed "travel ban" would target immigrants entering the country from the southern border, instead of at airports. A caravan of thousands of immigrants has been slowly making its way through Central America and is currently in Mexico, according to HuffPost.

The caravan's distance from the southern border hasn't deterred Trump from repeatedly commenting on the immigrants. "To those in the Caravan, turnaround, we are not letting people into the United States illegally," Trump tweeted on Thursday. "Go back to your Country and if you want, apply for citizenship like millions of others are doing!"

Advocates told HuffPost that the new policy could still land the administration back in court. "There's no question that there's going to be a huge court battle and that he would get smacked down if he tries to block all asylum-seekers,” Immigration Hub director of federal advocacy, Kerri Talbot, told HuffPost. "And I think the administration knows that. But frankly, I don't think they care because they just want to distract people from core issues, and they want to get their base riled up."