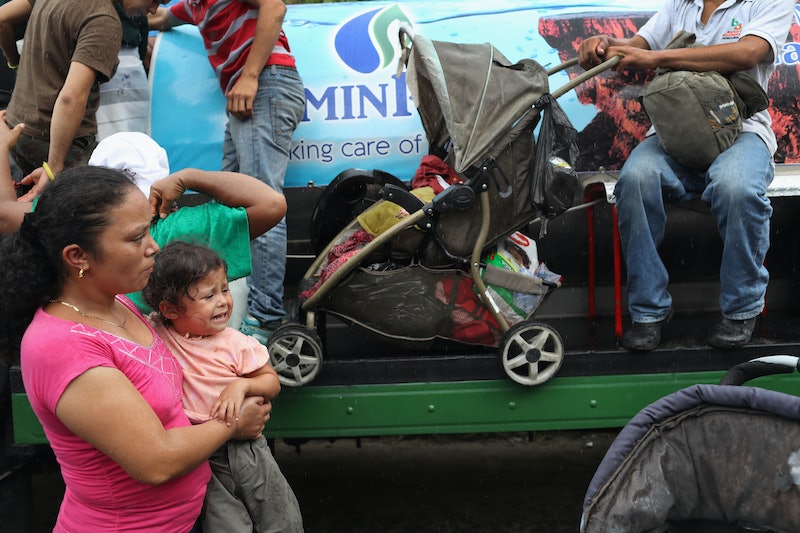 According to NBC News, a migrant caravan from Honduras with thousands of people is currently en route to the United States through Central America. The group is rapidly approaching the Mexico-Guatemala border, and on Tuesday, President Trump threatened Tuesday to withdraw aide from several Central American countries if they don't take steps to prevent the caravan from reaching the United States.

Migrant caravans from Central America to the U.S. are nothing new; in fact, they've formed annually for each of the past 10 years, according to AZCentral.com. But while past caravans have comprised only several hundred people, they've recently grown much bigger. In March, around 1,600 migrants marched to the United States from Central America, while this most recent caravan is estimated to have 4,000 people in it, according to NBC News.

In response, the Trump administration has demanded that the countries in question stop their citizens from reaching the U.S. border.

"We have today informed Honduras, Guatemala, and El Salvador that if they allow their citizens, or others, to journey through their borders and up to the United States, with the intention of entering our country illegally, all payments made to them will STOP (END)!," Trump tweeted Tuesday night.

Members of the caravan chanted "yes we can" as they trekked across Central America, and said that they were fleeing violence and lack of economic opportunities in their home countries. Honduras, Guatemala and El Salvador are all among the 10 most violent countries in the world, according to a 2016 analysis by the risk consulting agency Verisk Maplecroft. One pregnant 21-year-old nurse in the caravan told the Associated Press that she faced death threats from gang members at home, and insisted that "we are not criminals — we are migrants."

On Tuesday, however, Guatemalan authorities detained former Honduran lawmaker Bartolo Fuentas,who helped organize the caravan, in Guatemala and announced that he will be deported back to Honduras. The Honduran foreign ministry has urged its citizens not to join the caravan, Reuters reports, and according to NBC News, Mexican police have deployed an additional 500 officers to its border with Guatemala.

Additionally, police in Esquipulas, Guatemala temporarily blocked a group of around a 100 migrants from crossing the border on Monday, but eventually let them through after they refused to turn back, the Associated Press reports.

Under regional immigration law, adult citizens of Guatemala, Honduras, El Salvador and Nicaragua only need to present their national identity cards to cross between the borders of those countries. However, this doesn't apply in Mexico.

A day before the caravan formed, Vice President Mike Pence urged the governments of Central American countries to dissuade their citizens from emigrating illegally to the United States.

“Tell your people: don’t put your families at risk by taking the dangerous journey north to attempt to enter the United States illegally,” Pence said at an event in Washington DC.

But it's worth noting that, threats from the Trump administration notwithstanding, the Honduran government doesn't have the ability to prevent citizens who've already left its borders from continuing their trek — unless, as Vox notes, the Honduran military were to invade Guatemala or Mexico and attempt to intercept the migrants, which seems unlikely.