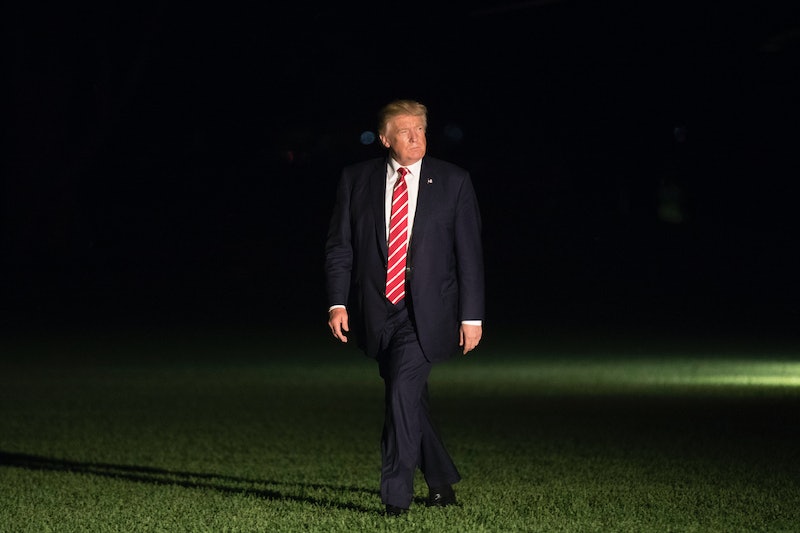 The feud must go on. In a Tuesday morning tweet, President Trump attacked Sen. Bob Corker, calling him "liddle," a term that doesn't appear in the dictionary but is either a misspelling of "little" or an attempt at giving himself a Southern — or even Russian? — accent. Those are just some of the theories on Twitter, as thousands respond to the president's tweet. The term "liddle" was even trending early Tuesday.

Of course this is just the latest installment in the ongoing fight between the president and Tennesse's junior senator, who exchanged a number of tweets over the weekend. Trump tweeted first on Sunday, arguing that he had withheld his endorsement from Corker, and that's why the senator chose not to run in 2018, because "he didn't have the guts to run!" without the endorsement. Corker and his staff staff dispute that account.

Corker then shot back later Sunday, also on Twitter, calling the White House an "adult day care center." "Someone obviously missed their shift this morning," he added, making it clear that Trump was the main one needing watched.

Later in the day — as Trump alludes to in his tweet — Corker gave an interview to The New York Times in which he confirmed the tweet. "I know for a fact that every single day at the White House, it’s a situation of trying to contain him," he told the Times. Corker also said president has the country "on the path to World War III."

Perhaps it's because he's not running in 2018 that Corker really let loose in attacking Trump. But Trump didn't take kindly to the free-flowing words, returning to the issue with Tuesday's tweet. Trump blamed part of the controversy on the Times because they taped the interview. "Was made to sound a fool, and that's what I am dealing with!" he wrote.

But the main feedback online wasn't about the insult to Corker or The Times. Rather, most people on Twitter just wondered what "liddle" was supposed to mean, and why the president put an apostrophe after the end of the word — as though he were abbreviating some longer word.

One user wrote, "It's a testament to how far we have fallen that what bothers me most about this tweet is the word "Liddle" with an apostrophe at the end." ThinkProgress justice editor Ian Millhiser wondered, "I have so many questions about this apostrophe. What is "liddle" short for?"

Others just assumed it was Trump's mistake — not an abbreviation. "Mr IQ Genius, it's 'Little' not 'Liddle,'" wrote Twitter user Ed Krassenstein, referencing a Forbes interview that came out Tuesday, in which Trump challenged his Secretary of State to an IQ match, after that same cabinet member reportedly called the president a "f*cking moron."

If he was going for a variation on "little," still others were willing to help him out. "It's lil' not liddle, you uneducated baboon," wrote Twitter user Vasu Kulkarni.

A final and best reason could be that Trump was trying to add some sort of accent à la "lil,'" but it just didn't work. Eye dialect is a literature term that is used to describe this kind of writing, where you're supposed to see someone's dialect as opposed to hearing it. Linguist Dwight L. Bolinger explained it as a case in which one "is at the level of ignorance where one misspells in this fashion, hence mispronounces as well."

But another Twitter user wrote a pointed reply: "Practicing your Russian accent again?"

Then there were, critiques on the political misgivings of Trump's attack. "'Liddle' Bob Corker' will chair the confirmation hearings for Trump’s nominee to replace Rex 'You're the Moron' Tillerson," wrote David Frum, a senior editor at The Atlantic.

That does bring the issue full circle to Trump's other simmering feud quite nicely.