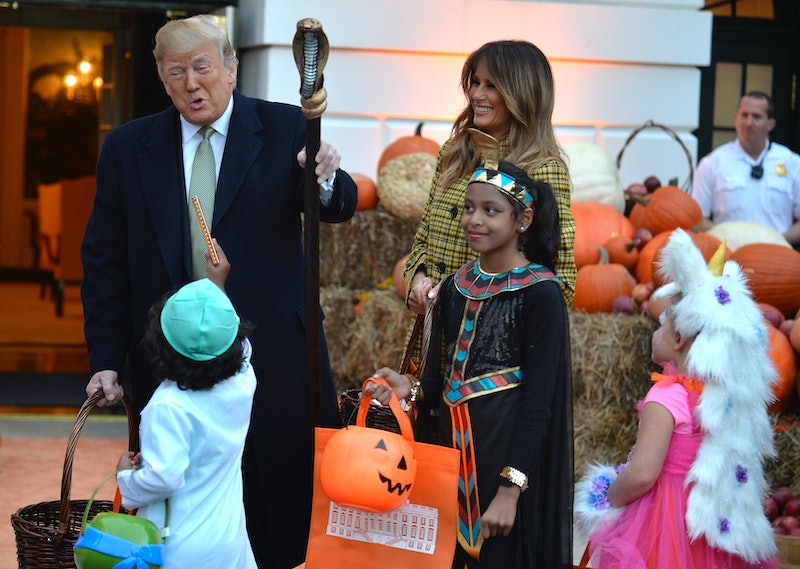 On Sunday, trick-or-treaters flocked to the White House for its annual Halloween party. Celebrating Halloween has been a part of presidential tradition for around 60 years, though each administration puts it own twist on the festivities. Indeed, in comparing Trump and Obama's White House Halloween parties, you'll notice a lot of similarities, but also a few key differences.

Sunday marked Donald and Melania Trump's second White House Halloween party. At the event, the first couple welcomed children from military families to trick-or-treat at the presidential home, as The Washington Post described. They even stood outside the White House's South portico to hand out candy themselves. Neither Trump wore a costume for this year's or last year's festivities, though they did enthusiastically greet a host of costumed children. The White House itself sported its own "costume," as it was decorated with an orange carpet, pumpkin patch, corn stalks, and much more, as USA Today noted.

Both of the Halloween parties the Trumps have hosted since the president took office have had components similar to those at Halloween parties during the Obama administration. Throughout Barack Obama's eight-year tenure, the 44th president and then-First Lady Michelle decked out the White House in Halloween-themed decor, handed out candy to trick-or-treaters, and also (typically) opted to not wear costumes.

However, there are also some key differences in the way the two administrations have approached Halloween activities. For both of their Halloween parties, the Trumps sported rather formal attire, with the president dressed in a suit and the first lady wearing a long coat. For their part, the Obamas typically styled themselves in a more casual manner.

For example, for their final Halloween party in 2016, the 44th president wore jeans and a sweater while the first lady donned an autumn-themed top. At their 2009 Halloween party, Michelle wore cat ears and a leopard-print shirt, creating her own casual "Catwoman" costume.

The Obamas' more casual approach to the holiday was also reflected in their dance display during their final Halloween party. After making brief remarks encouraging trick-or-treaters to eat as much candy as they wanted, Obama and Michelle danced together to Michael Jackson's "Thriller" onstage while the children watched them show off their moves, as NPR noted. Trump did not offer remarks at this year's Halloween gathering, nor was a dance display part of his itinerary.

Beyond the way in which the first couple engages with trick-or-treaters, there are also generally differences in Halloween decor and treats. Each administration puts its own touch on the holiday, and themes often differ from year to year. For example, in 2016 the Obamas opted to host an Alice in Wonderland-themed Halloween, decorating the outside of the White House with rabbits and gigantic teacups, among other things. According to USA Today, the first couple passed out kettle corn, Hershey's Kisses, fruit bars, and cookies to the children who attended. In contrast, this year the Trumps opted for more traditional spooky-themed Halloween decor and passed out Hershey's candy bars and Twizzlers to trick-or-treaters, as USA Today also described.

Overall, while the Halloween party is a long-standing White House tradition, the Obamas and Trumps approached the holiday a little bit differently. Their varying approaches to the trick-or-treating event provide just a small glimpse into some of the nonpolitical ways the White House changes under each administration.