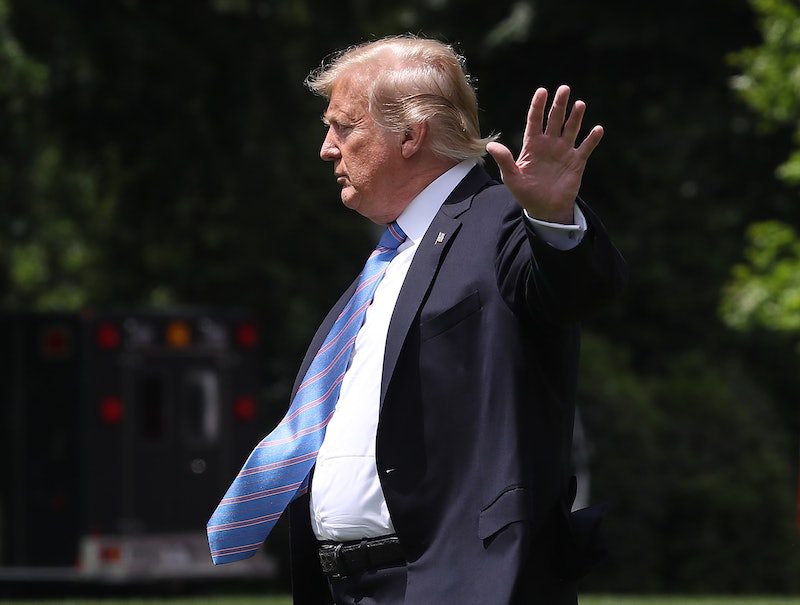 Contradicting his earlier claims that he was a pro-LGBTQ Republican during the 2016 presidential campaign, President Trump plans to oppose what advocates say is the most comprehensive non-discrimination bill ever voted on Congress, The Washington Blade first reported. An administration official told the paper that Trump opposes the Equality Act, which would amend the Civil Rights Act of 1964 and the Fair Housing Act to protect LGBTQ Americans from discrimination in not only employment — but also housing, education, public accommodations, jury service, and federal programs, according to the bill's text.

"The Trump administration absolutely opposes discrimination of any kind and supports the equal treatment of all," an administration official tells Bustle. "However, this bill in its current form is filled with poison pills that threaten to undermine parental and conscience rights." NBC News also confirmed Trump's opposition with a White House official.

The Trump administration has taken many steps to roll back LGBTQ rights — particularly trans rights — since taking office. In addition to his transgender military ban, his administration has reversed Obama-era guidelines that protected trans students from discrimination. He also signed an executive order that essentially allows for religious-based discrimination against LGBTQ people.

Sen. Tammy Baldwin of Wisconsin, who is a co-sponsor of the legislation in the Senate, told NBC News that she was disappointed in the president's opposition.

"No American should be at risk of being fired, evicted from their home or denied services because of who they are or whom they love," Baldwin told NBC News. 'The bipartisan Equality Act will move our country forward and the Trump administration’s opposition to it highlights how important it is to take back the White House in 2020."

The president was also denounced by LGBTQ rights groups. Mara Keisling, executive director of the National Center for Transgender Equality, said in a statement that the opposition is "not surprising" given that the bill would interfere with the Trump administration's anti-trans agenda.

"The Equality Act addresses a crisis of poverty, unemployment, homelessness, and persecution among 2 million transgender people, all of whom want nothing more than to live in a country that recognizes their dignity and their humanity," Keisling said in the statement. "We will not let a lawless, immoral President stand in our way because we have not come this far to only come this far."

Other LGBTQ leaders, including HRC's President Chad Griffin, also said the opposition was not a surprise. Sarah Kate Ellis, President and CEO of GLAAD added that the move was a flip-flop for Trump. The president supported amending the Civil Rights Act to include gay people in an interview with The Advocate in 2000, when he first explored a run for president as a third-party candidate.

"We don’t need to rewrite the laws currently on the books, although I do think we need to address hate-crimes legislation," Trump told the LGBTQ magazine at the time. "But amending the Civil Rights Act would grant the same protection to gay people that we give to other Americans — it’s only fair."

Without the Equality Act, LGBTQ Americans in 26 states without a state-level non-discrimination law can still be fired from work, denied housing, loans, and more for who they are and who they love. The House has reportedly planned a vote on the bill this week.

This article was updated on May 15.