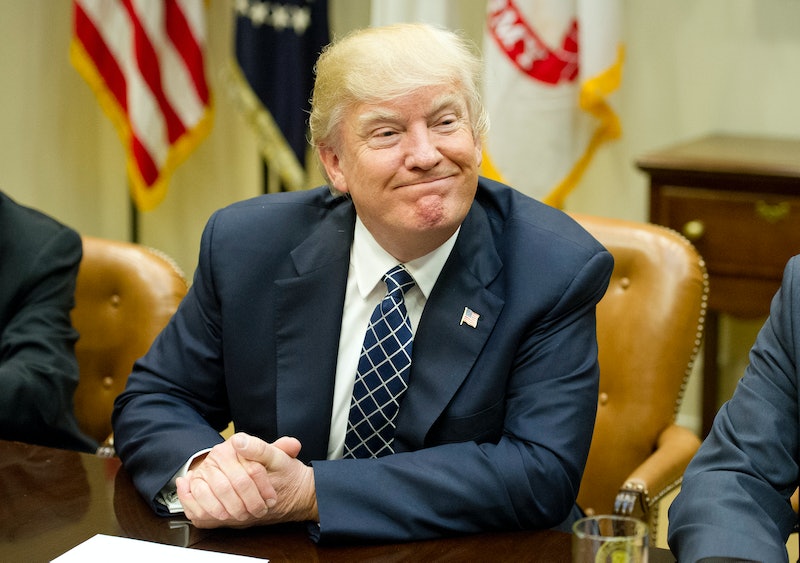 The new president has spent the past few months vowing to protect American workers. But this week, Trump overturned the Fair Pay and Safe Workplaces rule, a bill that literally has "fair pay" and "safety" in the name. This Obama-era policy prevented companies that had violated labor laws from competing for federal contracts unless they corrected the issue. The repeal of this law means that companies that commit workplace discrimination or don't pay their workers properly can still receive millions of dollars directly from the U.S. government — and this policy can be particularly devastating for women.

The Fair Pay and Safe Workplace Act, signed into law as an executive order by Obama in 2014, states that government contractors must be in compliance with U.S. labor laws in order to receive government contracts valued at $500,000 or more. The law required companies to disclose any violations, like sexual harassment allegations or failing to pay minimum wage or overtime, and make steps towards addressing the issue before being allowed to compete for contracts.

The Senate voted 49-48 to repeal the act earlier this month, largely led by Republicans who feel that the regulations are unfair to businesses. Trump finalized the measure this week by signing it into law.

White House Press Secretary Sean Spicer said that this decision was necessary in order to protect American businesses. "The rule simply made it too easy for trial lawyers to go after American companies and American workers who contract with the federal government," Spicer said.

But at the same time, companies who discriminate or take advantage of their employees will now have less incentive to remedy their unethical practices knowing that there will be no punishment from the U.S. government and that they will still be eligible to receive million-dollar contracts.

This affects thousands of American workers. A report distributed to the Senate by Sen. Elizabeth Warren found that 66 of the federal government's 100 largest contractors have at some point violated federal wage and labor laws, and without laws preventing them from doing so, they may never alter their behavior.

But this also disproportionately affects women. Studies have shown that as many as one in four women have experienced some form of workplace sexual harassment, and many fail to report it because they fear that their allegations won't be believed and could lead to their being fired.

Although Trump campaigned as a champion of middle-class American workers, his policy decisions so far suggest that he will instead use his legislative powers to stand by large corporations, even at the expense of worker's rights.