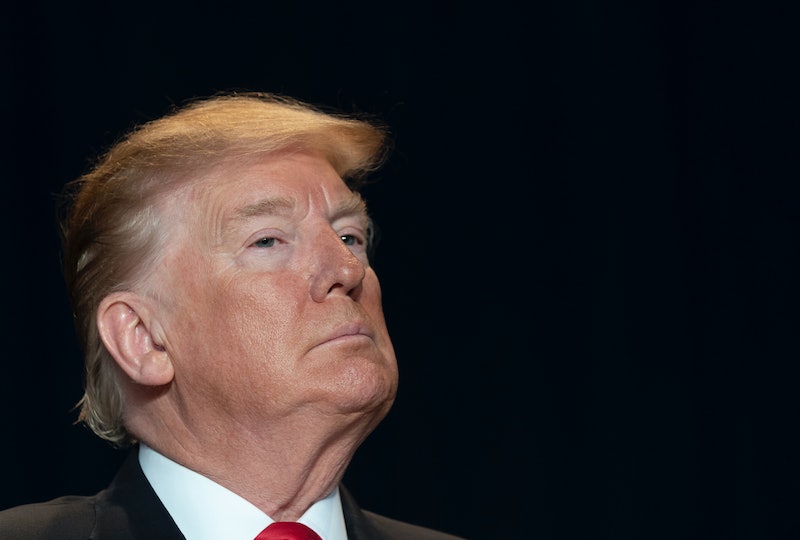 You could say it was one of his more unfortunate gaffes. At the National Prayer Breakfast in Washington, D.C., on Thursday, President Donald Trump boasted that the "abolition of civil rights" was one of the achievements "people of faith" had won for American society.

"Since the founding of our nation," Trump told his audience, "many of our greatest strides — from gaining our independence to abolition of civil rights to extending the vote for women — have been led by people of faith." Bustle has contacted the White House for comment.

The National Prayer Breakfast, which was once known as the Presidential Prayer Breakfast, is a tradition both Democratic and Republican presidents follow. In fact, the first American president to attend it was Dwight D. Eisenhower in 1953. Originally, however, Norwegian migrant and Methodist minister Abraham Vereide introduced the prayer group in the 1930s, Time magazine reported.

While based in Seattle at the time, Vereide first introduced the concept of politicians and businessmen gathering around breakfast to talk about social issues and pray. The idea was to do all of this at a time when people wouldn't be interrupted by their professional obligations.

This is far from the first time that Trump has made a verbal blunder in front of a crowd. One of the president's most unforgettable gaffes was when he showered praise on an African nation that has never existed.

In September, Trump spoke at the United Nations and said, "In Guinea and Nigeria, you fought a horrifying Ebola outbreak. Nambia's health system is increasingly self-sufficient." The presidential misspeak left people wondering if he was referring to Gambia, Zambia, or Namibia (his transcript noted that he was supposed to say "Namibia" in his speech).

At the White House, too, there have been reports of presidential mispronunciations. In August, Politico reported that an anonymous White House official said Trump pronounced Nepal as "nipple" just before he was scheduled to meet the Indian Prime Minister Narendra Modi in 2017.

The president also told the audience, which included House Speaker Nancy Pelosi, that he would not disappoint people when it came to religious liberties. "I will never let you down," Trump claimed. "I can say that. Never."