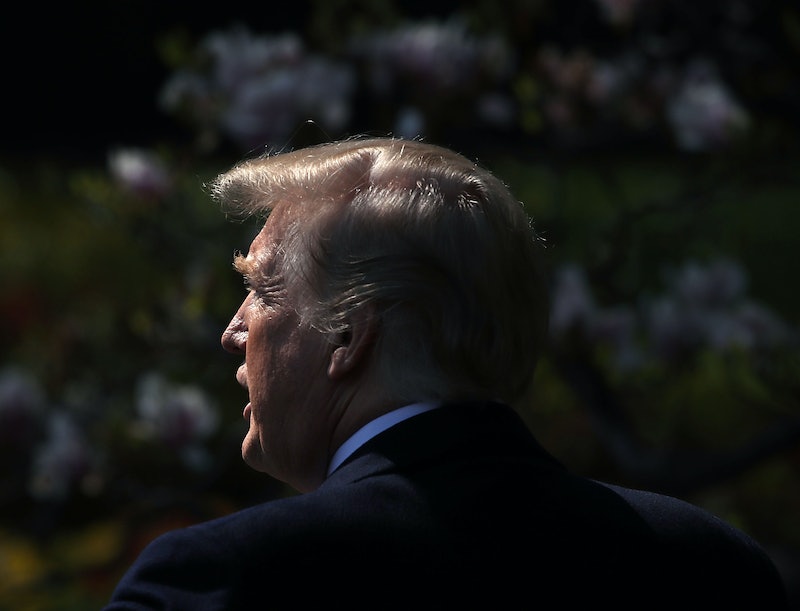 The same tabloid that allegedly suppressed a story from a former Playboy model about the affair she says she had with President Trump reportedly silenced an even wilder rumor. According to the New Yorker, the National Enquirer paid a doorman for his story about another alleged affair of Trump's shortly after the businessman-turned-politician announced his candidacy for president in late 2015. And this rumor involved Trump reportedly fathering a child with an employee of his in the '80s. A spokesperson for the Trump organization denied the allegation, the New Yorker wrote.

Dino Sajudin was a doorman at Trump World Tower at the time and was apparently privy to gossip about the goings-on inside. American Media Inc., the company that owns the National Enquirer, reportedly paid him $30,000 in November 2015 to secure the exclusive rights to the rumor he'd heard about Trump, but never published anything. The contract forbade Sajudin from mentioning the rumor to anyone, or else he'd have to pay a penalty of $1 million. After the presidential election was over — and amid investigations by the AP, the Wall Street Journal, and more — AMI released him from the contract.

Neither the New Yorker nor the Associated Press, the two publications that broke the news on Thursday, were able to verify the rumor that Trump had reportedly fathered a child in secret with an employee. They declined to release the name of the alleged mother or alleged child. After AMI learned that the New Yorker intended to publish the allegations, Radar Online — one of AMI's magazines — published an article admitting to the payment and explaining that its reporters had decided not to move forward with Sajudin's story because they had concluded that it was false.

Whether or not the rumor is true — and there seems to be no public evidence to support it — the payment from AMI is notable in itself. It recalls a decision by the company in 2016 to pay off former Playboy model Karen McDougal so that she wouldn't come forward with allegations about an affair she says she'd had with Trump. That Enquirer story was believed by some to have been a "catch and kill" operation, meaning that the tabloid bought the rights to her story with the explicit intention of not publishing it. Sometimes publications have been known to do this to control national coverage of an issue or to be able to blackmail the subjects of lewd stories.

The AP reported that Enquirer staffers felt the Sajudin payment fit the mold of another "catch and kill." A source within AMI told the New Yorker that — though the tabloid regularly pays sources for stories — the $30,000 stands out for its size.

"It's unheard of to give a guy who calls AMI's tip line big bucks for information he is passing on secondhand," the source said. "We didn't pay thousands of dollars for non-stories, let alone tens of thousands. It was a highly curious and questionable situation."

AMI's payment to McDougal — $150,000 — was also extraordinarily large. These rumors themselves are unverified. What is more clear, now, is that the company has a pattern of paying extraordinary sums of money for the rights to scandalous stories about Trump that it then declines to publish.

AMI told the AP that it had spoken about Sajudin's story to Trump spokespeople, but insisted that it had not taken direction either from them or from Trump himself. Bustle has reached out to AMI for comment.

Trump's personal lawyer, Michael Cohen, told the AP that he had spoken to the National Enquirer about the rumor when the magazine bought the rights to it. He also claimed that he knew nothing about the payment to Sajudin.

Trump is a longtime friend of David Pecker, AMI's CEO. The Enquirer typically writes coverage that is very favorable to Trump and even allowed him to write columns for the publication in 2016.

One source told the New Yorker that they suspected that the close friendship between Pecker and Trump must have meant that the president learned about Sajudin's rumor and the Enquirer's decision not to publish it. "Pecker's not going to take $30,000 from company funds to shut down a potentially damaging story about his buddy without making sure it got back to him so he could get credit," the source said.