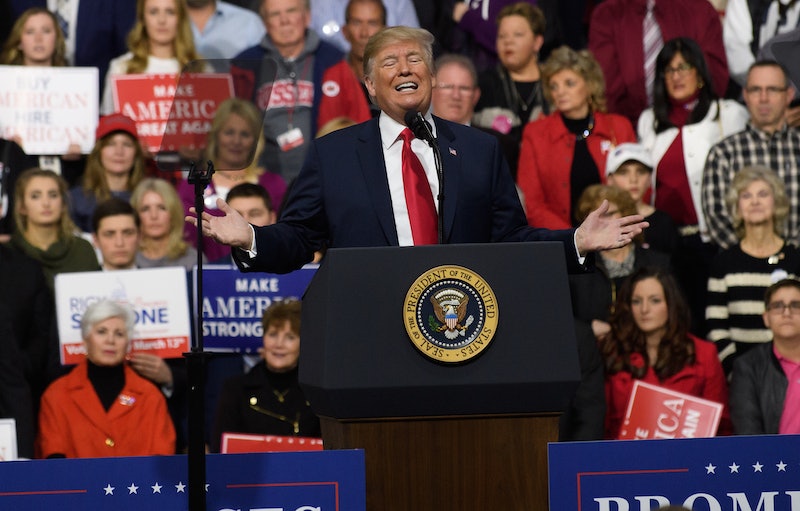 Over the weekend, President Donald Trump responded to criticism Joe Biden levied at him during a Saturday stump speech. The former vice president accused the president of destroying American values, according to HuffPost. Speaking at separate rallies on the same day, both men bashed each other's leadership capacities, offering a glimpse into what a potential 2020 showdown might sound like.

Biden has not confirmed whether he will attempt to run for president against Trump in the next presidential election, but he has publicly mulled over the idea, and is expected to make a decision by the end of the year. He and the president have long been vocal opponents of each other.

At a voting-oriented rally in Las Vegas, Biden said he believed that Trump was destroying American values, according to The Hill. The United States, he said, was built "on an idea, the American idea, basic fundamental decency, and it’s being shredded."

“But my God, think of what’s going on now,” Biden said, adding that "they're being shredded by a president who’s all about himself. It’s all about Donald."

Biden was in town to advocate for Democratic candidates in Nevada, according to HuffPost. He urged voters to get out and vote in the coming midterms so that they might help "take back the Senate and change the world as we know it."

"Folks, it’s time to get up! Lift our heads up!" Biden told the crowd, according to video of the speech shared to Twitter by The Hill. "Remember who the hell we are."

The president also spoke at a rally over the weekend, and at one point, according to multiple reports, asked the crowd to help him decide on a nickname for the former vice president. He referred to Biden as "Sleepy Joe Biden" and "One Percent Joe." He also echoed a crowd member's proposal to refer to Biden as "Creepy Joe," according to footage of the rally.

“I think he ran three times, and he never had more than one percent, so we call him ‘One Percent Joe,’” Trump said, referring to Biden's previous bids for the presidency.

“And then remember what happened?” the president continued. “Obama came along and took him off the trash heap and made him vice president. But he never had more than one percent.”

The president told rally-goers that he needed to decide which nickname to call Biden. "So we call him either Sleepy Joe Biden or One Percent. Which is better?" Trump asked the crowd. In video of the rally, the crowd is heard cheering in response.

As Democrats and Republicans alike gear up for the upcoming and hotly contested midterms, as well as the impending 2020 presidential election thereafter, the Biden-Trump sparring is probably only going to continue. And given the likelihood that Biden will stump for the eventual Democratic nominee, whether or not that person is him, there's little chance that the rhetoric will be cooling down any time soon. In many ways, Saturday simply marked a new beginning.