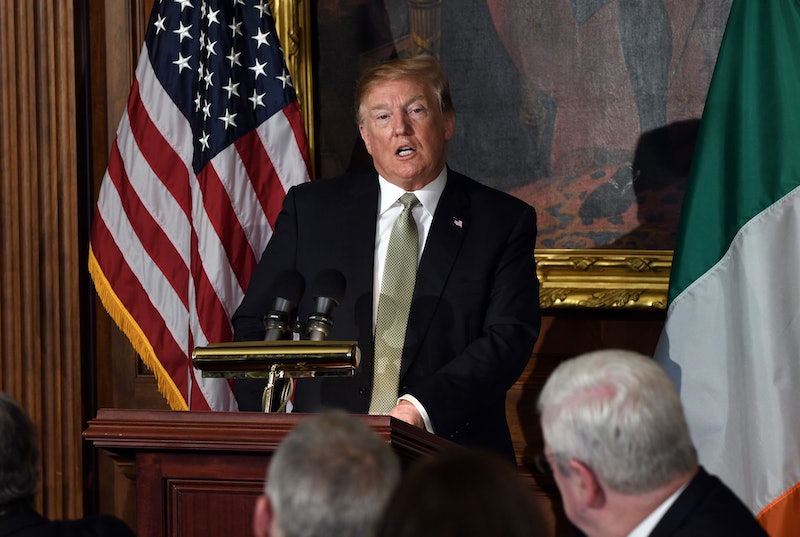 Following the deadly shooting at two New Zealand mosques, President Trump gave his "warmest sympathy and best wishes to the people of New Zealand" in a tweet Friday morning. Police say that at least 49 people have been killed in the shootings, which took place during Friday prayers, the Associated Press reported.

"My warmest sympathy and best wishes goes out to the people of New Zealand after the horrible massacre in the Mosques," Trump said in a tweet. "[Forty-nine] innocent people have so senselessly died, with so many more seriously injured. The U.S. stands by New Zealand for anything we can do. God bless all!"

Unlike comments from New Zealand leaders and other U.S. officials, Trump's tweet notably did not use the word "terrorism."

The New York Times reported that according to police, shots were fired at Al Noor Mosque and Linwood Mosque in Christchurch, a city on New Zealand's South Island, while they were full of people attending Friday noon prayers. David Meates, the Canterbury District Health Board chief executive, said in a statement that 48 people were being treated for gunshot wounds. The patients include young children, and their wounds "range from critical to minor."

Police have taken three men and one women into custody, The Times reported. New Zealand's police commissioner Mike Bush said that a man in his late 20s has been charged with murder, per The Washington Post.

On Friday morning, White House National Security Adviser John Bolton described the shootings to reporters as "what seems to be a terror attack” and a “hate crime," CNN reported.

“We’re obviously greatly disturbed on what seems to be a terror attack, this hate crime in New Zealand. We’ve been in touch with our embassy overnight, we’re still getting details, but the State Department and others are following up on it," Bolton said, according to CNN. "We’re very concerned, we’re going to cooperate with New Zealand authorities to the extent we can if there’s any role we can play, but we’re obviously following the events there very closely.”

According to Mother Jones, Trump's tweet sending his "warmest sympathy" to New Zealand regarding the shootings came after he retweeted a live-blog about the attack from the far-right website Breitbart, which has promoted inflammatory Islamophobic positions. That reported tweet now appears to be deleted.

There have been no mass shootings in New Zealand since an attack in 1990 in Aramoana, when a man killed 13 people, NBC News reported. That incident led to the country tightening its gun laws. It's unclear how or where the weapons used in the mosque shootings were obtained, NBC News reported.

New Zealand Prime Minister Jacinda Ardern has said in a press conference that the shootings appeared to be a planned "terrorist attack."

"This is, and will be, one of New Zealand's darkest days," she said. “What has happened here is an extraordinary and unprecedented act of violence."

The country has raised its national security threat level from low to high, The Washington Post reported. Several countries and cities across the world have stepped up security at mosques and other places of worship on Friday, according to CNN, including France, London, New York, Minneapolis, and Los Angeles.