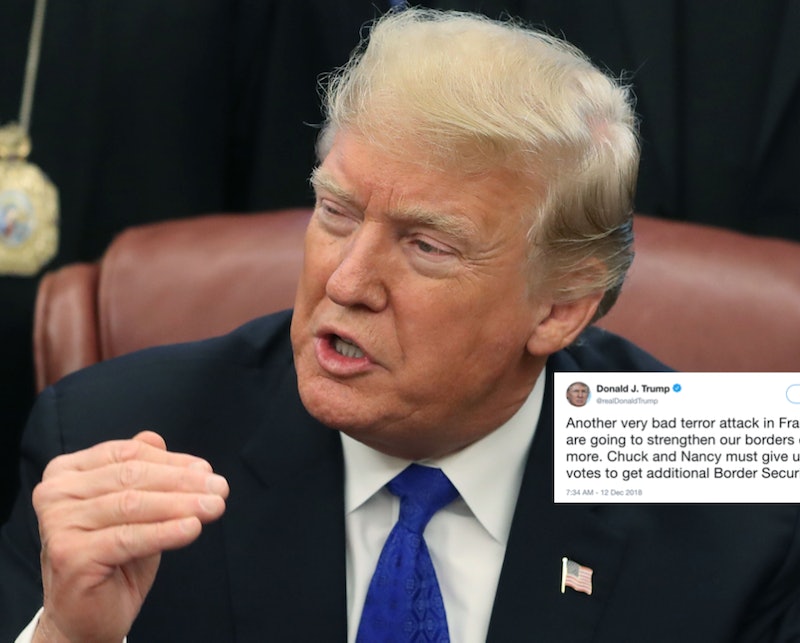 On Tuesday evening, a gunman opened fire at Strasbourg, France's famous Christmas market, killing at least two. In his first tweet about the situation, President Donald Trump reacted to Strasbourg's attack by calling for border funding in the United States. He's deep in a fight with parts of Congress to add that funding to year-end budget bills — but by drawing a comparison to this mass shooting, he's missing something big.

"Another very bad terror attack in France," Trump wrote on Wednesday. "We are going to strengthen our borders even more. Chuck and Nancy must give us the votes to get additional Border Security!"

French authorities are saying that the suspected attacker was born in Strasbourg, according to The Independent. Because he was born in France, additional border security to prevent illegal immigration in France would not have stopped him. Many of those who have carried out mass shootings in the United States — including those in Parkland, Thousand Oaks, and Tallahassee — were U.S. citizens.

Strasbourg's suspected attacker has previously served jail time in both France and Germany, and he was kept on a government national security threat watchlist, per the BBC. Some of his neighbors have told the Associated Press that they believe his time in prison "destabilized" him.

The suspect began shooting next to the Christmas market — which is highly popular and the oldest in the country — around 8 p.m. local time, per the BBC. According to The New York Times, he killed two people and injured a dozen others with both a gun and a knife. One was left brain dead and six more had serious wounds, Paris terrorism prosecutor Rémy Heitz announced on Wednesday (French authorities have opened a terrorism investigation).

"He had been incarcerated multiple times," Heitz said of the suspect, "and was known to the prison administration for his radicalization and his proselytizing attitude."

Police are currently searching for the 29-year-old. He reportedly fled the area in a taxi and exchanged gunfire with law enforcement, but has so far managed to evade capture. The French Deputy Interior Minister said it's possible he escaped the country, per the BBC.

Antonio Tajani, the head of the European Parliament (which meets in Strasbourg) spoke out about the shooting on Tuesday, calling it "a criminal attack against peace, against democracy, against our model of life," per the AP. In a Tuesday night tweet, he also expressed "all [his] sorrow" at the incident.

Trump's response took on a different tone. Rather than linger on the tragedy itself, the U.S. president's Wednesday tweet referenced a conversation he had with Nancy Pelosi and Chuck Schumer, the Democratic leaders in Congress, the day before. During that meeting, the president threatened to shut down the government if he doesn't receive the funding he wants for border security, per the AP.

Studies suggest that immigrants to the United States — and particularly undocumented immigrants — commit crimes at lower rates than citizens. According to the BBC, the Strasbourg shooting suspect's motive is not yet clear.