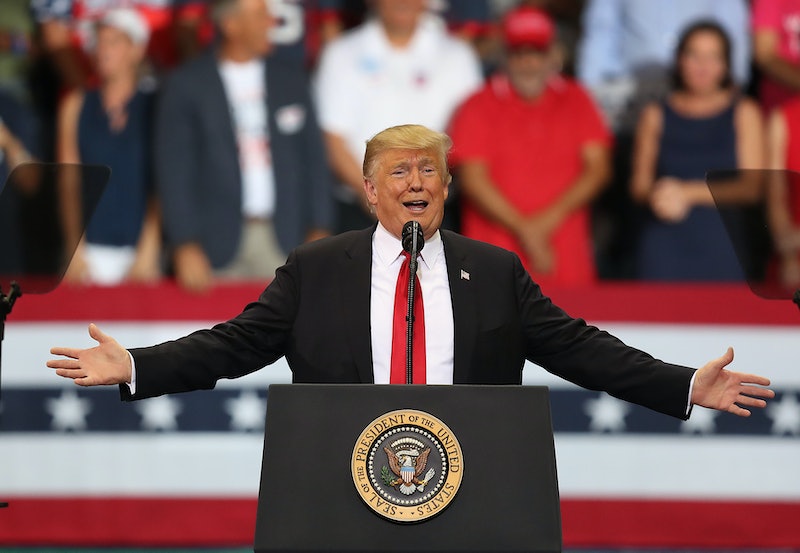 Trump has spent the last few days on a full-court media rampage, attending rallies, visiting Pittsburgh in the wake of a synagogue shooting, and giving multiple interviews in the week leading up to the 2018 midterms. But one of the more memorable quotes from POTUS amid all that activity came during an interview with ABC right before he spoke at a rally in Florida on Wednesday night. In that interview, Trump said that he tells the truth "when he can," which seems to suggest there are also times he doesn't tell the truth.

The conversation arose after ABC's Jonathan Karl asked Trump about a promise he once made to never lie. That promise in question occurred in August 2016, while Trump was a presidential candidate.

At the Charlotte Convention Center, at the time, he said to his supporters, "I’ve traveled all across this country laying out my bold and modern agenda for change. In this journey, I will never lie to you. I will never tell you something I do not believe. I will never put anyone’s interests ahead of yours."

On Wednesday, however, he said,

Well, I try. I do try ... and I always want to tell the truth. When I can, I tell the truth. And sometimes it turns out to be where something happens that's different or there's a change, but I always like to be truthful.

According to The Washington Post, Trump has made over 4,000 false or misleading claims during his presidency, as of August.

Trump's response was immediately met with confusion and dismay from several journalists and politicians. Former Congressman Joe Walsh tweeted, "Every word Trump says here is a lie. Trump has ZERO relationship with the truth."

CNN's Don Lemon said of Trump's comments to a panel on Wednesday night, "Why can't he tell the truth all the time? Shouldn't a president be truthful all the time?"

Max Boot, a columnist for The Washington Post, replied to Lemon, "Well, the truth doesn't favor him. ... He doesn't tell the truth most of the time because he doesn't think the truth helps him." Boot then pointed out a conspiracy theory Trump pushed on Wednesday about George Soros funding the migrant caravan marching toward the U.S. border. Boot said, "He continues doing stuff like this."

In addition to Trump's strange answer on his own levels of truthfulness, he also released an ad earlier in the day, in which Democrats were accused of allowing murderers to enter the country. Trump captioned the tweet by writing, "It is outrageous what the Democrats are doing to our Country. Vote Republican now!"

The reaction to Trump's endorsed national campaign ad was equal parts shock and fury. It was described by CNN's Stephen Collinson as one of the most "racially problematic [ads] in modern political history."

Trump's attitude during his public interviews and appearances has been considered by some to be a strategy to increase voter turnout for the midterms, given the early projections of a blue wave in the polls.

Regardless of whether that's true, Trump has denied that his rhetoric is a fearmongering tactic, especially in regard to illegal immigration. He said on Wednesday, “I’m not fearmongering at all. This is a very important subject. ... Nobody is coming in.”