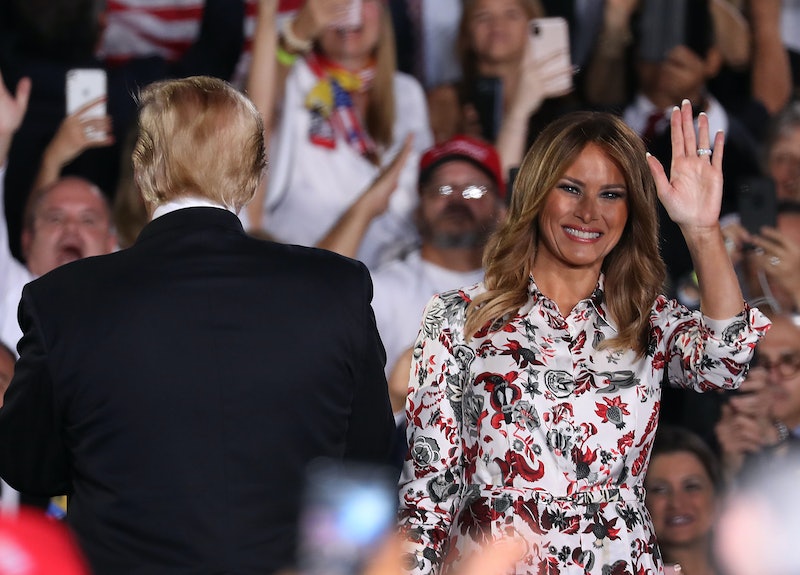 Last week, FLOTUS and POTUS traveled to Alabama to visit an area torn apart by tornadoes, and photos from the trip inspired an entirely unrelated and pretty bizarre media storm. For several days, the media speculated over whether Melania Trump actually went to Alabama, or if a body double went in her place. Now, the president has finally weighed in, and Trump says the Fake Melania rumors are "Fake News."

The conspiracy theory spread quickly after people began to doubt the woman depicted in the Alabama photos was actually Melania. The theory was only amplified when Melania tweeted her own pictures and a video of the trip, none of which showed her face without big sunglasses on. And naturally, it didn't take long for #FakeMelania to take flight, once again.

POTUS squashed that theory on Wednesday morning. In a tweet, Trump said, "The Fake News photoshopped pictures of Melania, then propelled conspiracy theories that it’s actually not her by my side in Alabama and other places. They are only getting more deranged with time!"

As for Melania, she didn't speak publicly on the matter, but her spokeswoman, Stephanie Grisham, did. In a tweet on March 11, Grisham wrote, "@flotus & @potus traveled to Alabama to pay their respects & comfort victims of the tornado devastation. In typical fashion, @theview chooses to laugh in the face of tragedy. Shameful."

Minutes before Trump's tweet on Wednesday morning, the cast of Fox & Friends slammed the conspiracy. In response to a video clip taken from The View, where co-host Joy Behar said the woman with Trump in Alabama didn't look like Melania, Fox News contributor Tammy Bruce argued that Behar had an ulterior motive.

Per Newsweek, Bruce said, "This is obviously one of the most beautiful women in the world and she was mourning here, as normal people would. Most normal people maybe look a little different when we’re sad. Classic mean girl environment.”

When you’re in college or high school, there is the pretty girl who is nice, and you go with the marker to mark up her locker and then you gossip about her and you call her names. That is what these adult women were doing to the first lady. It reminds us of their jealousy, envy, the fact they have nothing else to do other than being mean. That is the only answer.

It might surprise you to know that this isn't the first time #FakeMelania theories have floated around Twitter. In fact, theories of a body double for FLOTUS have been circulating since 2017, when a man named Joe Vargas posted a side-by-side of an older picture of Melania, along with a picture of the first lady standing next to Trump at a press event, per Vox.

Vargas' initial theory gained so much momentum in 2017 that the White House eventually released a statement later that month. In a statement to CNN, Grisham denied the rumors, saying, "Once again, we find ourselves consumed with a ridiculous non-story when we could be talking about the work the first lady is doing on behalf of children, including the opioid crisis that is gripping our nation."