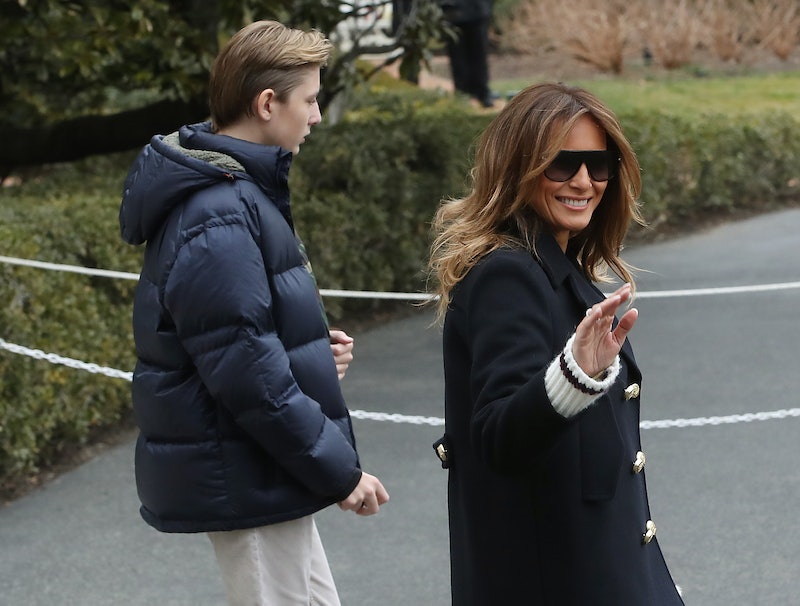 Before he was president, Donald Trump managed to bring a number of conspiracy theories out into the mainstream. So, perhaps it's only karma that he and his family become the subject of kooky conspiracy theories born in the dark corners of social media? Whatever it is, the president's visit to tornado-ravaged Alabama has Twitter thinking Fake Melania is back and the jokes are ridiculous.

The theory that First Lady Melania Trump had a body double, which she would sometimes send out to stand in for her at various events and photo ops, appears to have first surfaced in 2017 thanks to a man named Joe Vargas. According to Vox, Vargas was the first person to ever question Melania's "realness," if you will.

"This is not Melania," Vargas tweeted in response to video footage of the president and first lady at a Secret Service training facility in October 2017. "To think they would go this far & try & make us think its her on TV is mind blowing. Makes me wonder what else is a lie." Vargas would go on to compare pictures of the "real Melania" to those of the apparent "fake Melania."

The Fake Melania movement has continued to persist since then, thanks in part to merchandise available for purchase on Amazon and Twitter's inability to ever let anything truly die. In fact, footage of Trump and Melania paying their respects Friday at dozens of memorial crosses erected for the 23 people killed in a series of deadly tornadoes that ripped through Alabama earlier in the week reignited debate over whether it is or isn't Melania.

For some Fake Melania jokesters, it was the fact that President Trump had successfully managed to hold hands with the first lady that tipped them off to the body double. Melania (that's the "real Melania" for all you Fake Melania truthers out there) has, on more than one occasion, rejected her husband's attempts to hold hands.

Others were more entertained by speculating as to who "fake Melania" might really be underneath her dark, oversized sunglasses. Is it a Secret Service agent that happens to have a similar haircut? Or could it be Russian President Vladimir Putin under those shades?

While Twitter was awash in Fake Melania jokes over the weekend, some Twitter users appeared genuinely convinced that the woman traveling with President Trump was not his wife. They pointed to her hair, or height, or face shape, or her general ease of movement as proof that the Trump administration had subbed in "fake Melania" for the trip.

All joking (and yes, even serious debate) aside, the first lady likely doesn't have a body double stand in for her at whichever official administration events she doesn't feel like attending. For what it's worth, both the Secret Service and the Office of the First Lady have denied claims of a body double.

"Once again, we find ourselves consumed with a ridiculous non-story when we could be talking about the work the first lady is doing on behalf of children, including the opioid crisis that is gripping our nation," Stephanie Grisham, the first lady's communications director told CNN in 2017.

More like this
17 Powerful Photos From March For Our Lives Protests Across The U.S.
By Michelle Toglia
How 5 People Upended Their Lives To Fight For Abortion Rights
By Hannah Smothers
Boris Johnson’s Leadership Is In Question – Again
By Bustle UK
Here’s How Lizzo Is Supporting Abortion Rights After The Roe v. Wade Reversal
By Brad Witter
Get Even More From Bustle — Sign Up For The Newsletter