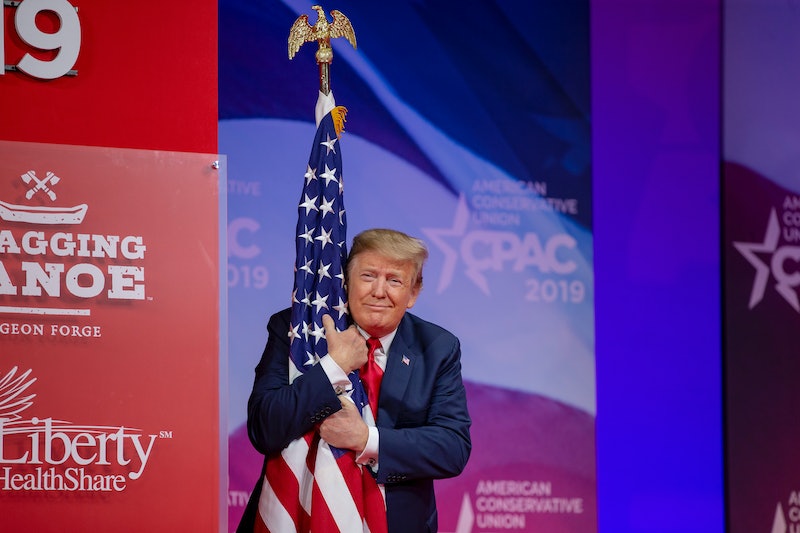 President Donald Trump is vowing to protect free speech. While speaking at the Conservative Political Action Conference (CPAC) on Saturday, Trump promised an executive order mandating colleges "support free speech" for all or risk having their federal funding cut. Although the president didn't elaborate as to the details of his planned executive order, it's thought to be a response to the alleged attack against conservative activist Hayden Williams at the University of California, Berkeley campus last month.

"Today I'm proud to announce that I will be very soon signing an executive order requiring colleges and universities to support free speech if they want federal research dollars," Trump said in video posted to the CPAC 2019 Twitter account.

President Trump then went on to say that institutions of higher education would have to let conservatives speak if they wanted to continue receiving federal money. "If they want our dollars, and we give it to them by the billions, they've got to allow people like Hayden and many other great young people and old people to speak," CNN reported Trump said Saturday, after bringing Williams on stage. "Ladies and gentlemen, he took a hard punch in the face for all of us," the president said of Williams.

In February, cell phone video surfaced showing Williams being punched in the face following a verbal altercation with two other men on the UC Berkeley campus in Berkeley, California. According to The San Francisco Chronicle, Williams was reportedly on campus attempting to recruit students to the right-wing advocacy group Turning Point USA at the time of the incident. University officials have since said that none of the men involved in the incident are affiliated with school.

Speaking at CPAC on Saturday, Trump said his administration rejected "oppressive speech codes, censorship, political correctness, and every other attempt by the hard left to stop people from challenging ridiculous and dangerous ideas," The Hill reported. "Instead we believe in free speech, including online and including on campus."

But according to the American Civil Liberties Union (ACLU), the First Amendment to the Constitution already serves to protect free speech on college campuses. That being said, the ACLU notes that while the First Amendment protects free speech, including that which may be offensive or bigoted, it "does not protect behavior on campus that crosses the line into targeted harassment or threats, or that creates a pervasively hostile environment for vulnerable students."

But that hasn't stopped Trump's supporters from cheering news of his supposedly impending executive order. Talking Points USA founder Charlie Kirk thanked Trump over Twitter for forcing what he called "intolerant islands of totalitarianism" to "reform their policies or lose money."

On Saturday, the president's son, Donald Trump Jr., also hailed his father's announcement as "YUGE" news on Twitter. "So glad to hear this," he tweeted. "Left wing activists have been stymieing free speech on college campuses for far too long."