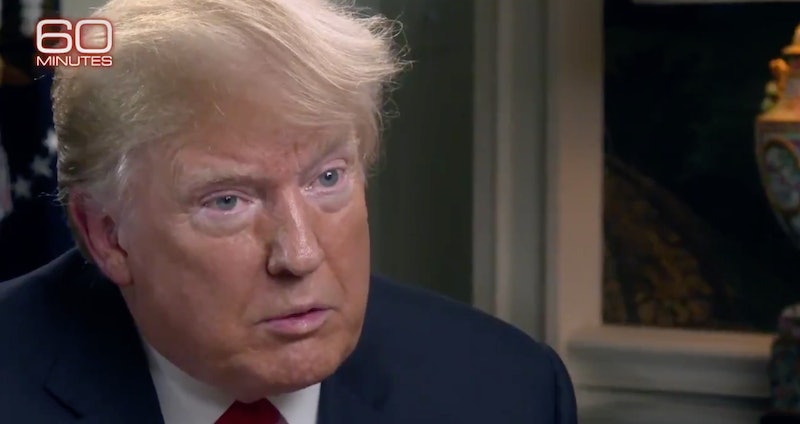 President Donald Trump returned to the topic of Justice Brett Kavanaugh's confirmation in an interview with 60 Minutes' Lesley Stahl that aired on CBS Sunday night. Pressed on how he treated Kavanaugh's accusers, Trump defended mocking Dr. Christine Blasey Ford and said it was key to getting Kavanaugh confirmed. Pressed on whether he treated Ford with respect, Trump said, "It doesn't matter. We won."

During the interview, Stahl referenced an early October Trump rally in Mississippi where the president mocked Ford for her Senate Judiciary Committee testimony. Ford accused Kavanaugh of sexually assaulting her in high school, which he denies, and told the committee the details that she remembered. Trump mocked her answers in front of hundreds of supporters.

Stahl told Trump he mimicked her. "Had I not made that speech, we would not have won," Trump responded. "I was just saying she didn't seem to know anything."

Trump said he didn't make fun of Ford, and then Stahl pushed back. "Professor Blasey Ford got before the Senate and — and was asked what's the worst moment. And she said, 'When the two boys laughed at me, at my expense.' And then I watched you mimic her and thousands of people were laughing at her."

"Do you think you treated her with respect?" Stahl later asked, challenging Trump's answer.

Trump said he did and added, "You know what? I'm not gonna get into it because we won. It doesn't matter. We won."

Trump addressed a large number of other topics during the interview. For example — despite the defense of mocking of Ford and acknolwedgment that he attacked Democrats after Kavanaugh's confirmation — Trump said he thought the country was coming together.

Stahl pointed out the contradiction. "You won. And then after you won, instead of saying, 'Oh, let's all come together, this is wonderful. Let's heal all of this,' you come out and bash the Democrats," Stahl told Trump.

Trump also said he's getting used to being president. "I think so. I mean, I felt comfortable at the beginning, other than it was a little surreal to say I'm the president of the United States, but I think that's true with everybody ... Now I very much feel like POTUS. I do. I feel like the president."

Whether or not his rallies are presidential — and his treatment of Ford — is another debate.