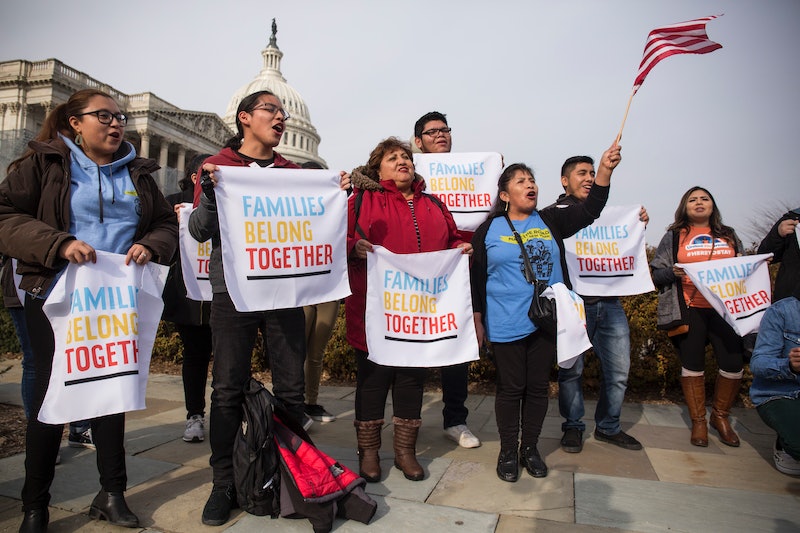 The Washington Post reported on Thursday that the Trump administration considered a plan to release detained undocumented immigrants into so-called sanctuary cities. Although administration officials had told the Post that such a proposal is no longer under consideration, President Trump said Friday that releasing migrants in sanctuary cities is still very much on the table.

"Due to the fact that Democrats are unwilling to change our very dangerous immigration laws, we are indeed, as reported, giving strong considerations to placing Illegal Immigrants in Sanctuary Cities only," the president tweeted Friday. "The Radical Left always seems to have an Open Borders, Open Arms policy – so this should make them very happy!"

"Sanctuary city" is an umbrella term for local jurisdictions that don't enforce federal immigration laws, and it's unclear whether or not it would be legal to release detained immigrants in such cities. CNN reports that Stephen Miller, one of Trump's top advisers, unsuccessfully pressed officials at the Department of Homeland Security to implement the policy in February, but that the department's legal counsel said that it would probably be illegal and refused to produce legal guidance saying otherwise.

"I'm not sure what the difference is between [Trump's proposal] and just releasing someone with an order of supervision, or some other means requiring a person to show up for immigration proceedings, but letting them remain free in the mean time (which is how asylum applicants are supposed to be treated)," Siskind says. "Perhaps Trump thinks the border detention facilities are filled with violent criminals (not true, of course)."

According to University of Washington Law Professor Mary D. Fan, the attorney general "has a lot of discretion under immigration law on issues such as where adult [immigrants] are returned." But, she tells Bustle, "there may be more limitations with their children."

But Trump said on Friday that the proposal is very much alive, MSN reports, telling reporters that his administration is "strongly looking at" the possibility of enacting such a policy.

Speaker of the House Nancy Pelosi's office condemned the proposal, with spokesperson Ashley Etienne saying in a statement "the extent of this Administration’s cynicism and cruelty cannot be overstated.”

“Using human beings—including little children—as pawns in their warped game to perpetuate fear and demonize immigrants is despicable, and in some cases, criminal," Etienne said, according to Fox News.