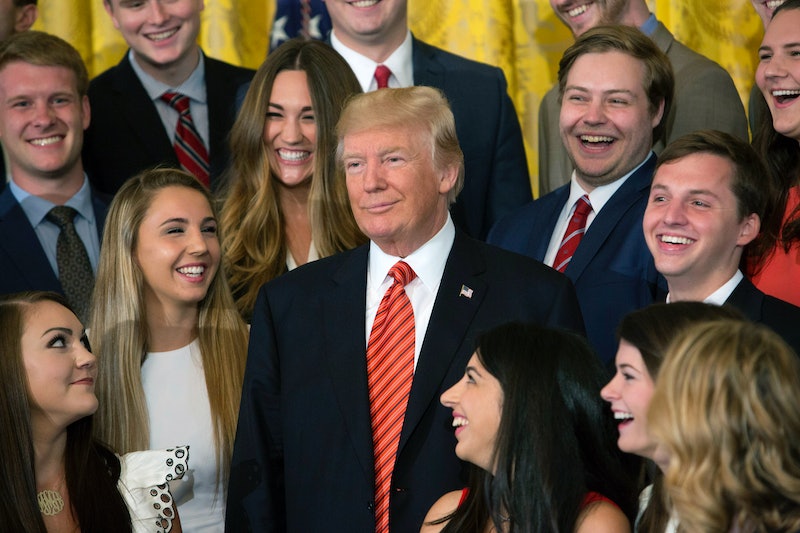 During a photo op with White House interns on Monday, President Trump got big laughs when he rolled his eyes at an Associated Press reporter and told her to be "quiet." The reporter's offense? Daring to ask the president questions in a public setting. Or as some might call it, doing her job.

Among the shutter clicks, Associate Press reporter Catherine Lucey can be heard asking, "Mr. President, should Jeff Sessions resign?" to which Trump looked visibly annoyed and rolled his eyes. Lucey followed up by asking a question about health care, which is when Trump responded by very seriously directing her to "Be quiet."

What makes the exchange so cringeworthy is Trump's belief that he should have the ability to silence other adults, especially those who are trying to do their job. Trump has no decorum when dealing with the press, which he constantly decries as "fake news" and has described as the "enemy of the American people." He does little to mask his outright hatred for those who report on him. This isn't even his first time telling a reporter to "be quiet," which he did to NBC's Katy Tur during a press conference last summer when she, like Lucey, dared to ask Trump a question. At a news conference.

The disgust Trump has for Lucey's line of questioning is unmistakable, and when he hisses at her to "quiet," it's like watching a teacher reprimand an unruly student.

The fact that he got laughs from the room is not surprising since he was, of course, surrounded by White House interns, who would most likely not feel it was their place to correct the president 's behavior. But it should be noted that the reasoning he gave for silencing the reporter has no basis in fact.

Trump, after rolling his eyes and yelling "quiet," went on to tell the interns around him that reporters are not supposed to ask questions during photo ops, and that the reporter was wrong to do so, breaking unwritten White House rules.