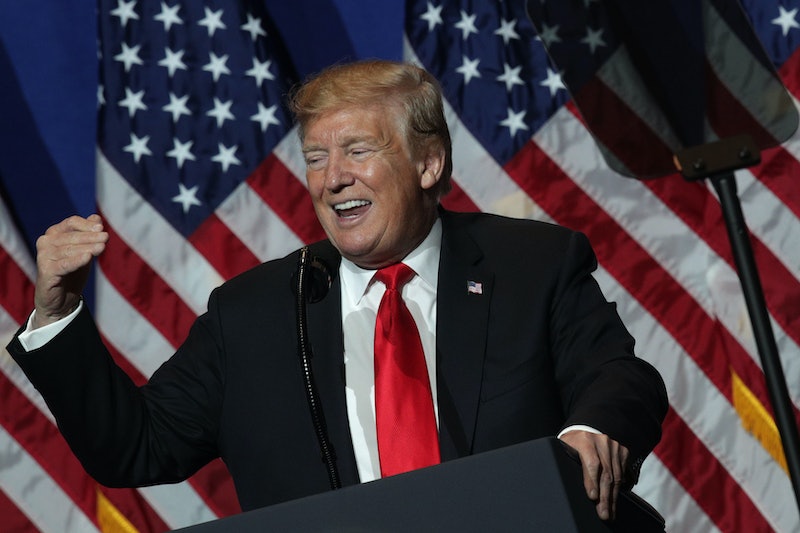 A wave of laws designed to ban or seriously restrict abortion at the state level has made reproductive rights a central issue in the 2020 election. President Donald Trump weighed in on the issue Sunday, days after a number of Democratic presidential candidates released comprehensive abortion policies. While identifying himself as "strongly Pro-Life," Trump appeared to suggest that Alabama's restrictive abortion ban went too far, noting that he supported exceptions for rape and incest.

"I am strongly Pro-Life, with the three exceptions - Rape, Incest and protecting the Life of the mother," Trump tweeted, adding that his position on abortion was the same as Ronald Reagan's.

The Human Life Protection Act recently signed into law in Alabama defines abortion and attempted abortion at any stage of gestation as felony offenses with no exceptions for rape or incest. Instead the law allows only for exceptions in cases where the pregnant patient's life is at risk.

However, despite his apparent disagreement with certain provisions of the Alabama abortion law, Trump urged Republicans to stand "united" on the issue of abortion, arguing that any division would roll back the gains anti-choice legislators had won. "We have come very far in the last two years with 105 wonderful new Federal Judges (many more to come), two great new Supreme Court Justices, the Mexico City Policy, and a whole new & positive attitude about the Right to Life," Trump tweeted. "We must stick together and Win for Life in 2020. If we are foolish and do not stay UNITED as one, all of our hard fought gains for Life can, and will, rapidly disappear!"

On Sunday, without citing any specific examples or evidence, the president claimed the left was "imploding" over the issue of abortion rights.

However, despite the president's claim, it's been Republicans that appear to be divided over abortion policy. Since Alabama's near-total abortion ban was signed into law last week, a number of them have spoken out against it, including Republican National Committee Chairwoman Ronna McDaniel. In an interview with CNN, McDaniel said she "personally ... would have the exceptions" in abortion legislation. Republican Sens. Susan Collins and Lisa Murkowski have also come out against the law's lack of exceptions for rape and incest.

In an interview with CNN last week, Collins called Alabama's abortion ban "a terrible law" and characterized it as "very extreme." In a separate interview with The Hill, Collins clarified that she was "very much opposed to the Alabama law." What's more she argued that the law would "lead to a virtual ban on abortions in Alabama, even for victims of incest and rape."

According to The Hill, Murkowski also told reporters that she disagreed with Alabama state legislators' decision to block Democrats' attempts to add exceptions for rape and incest to the law. "I believe that there need to be exceptions," The Hill reported Murkowski told reporters while heading into the Senate.

In comments reported by The Washington Post, House Minority Leader Kevin McCarthy described Alabama's Human Life Protection Act as having gone "further" than what he believes. "I believe in exceptions for rape, incest and life of the mother, and that's what I've voted on," the paper reported he said.

In a statement released to the paper via a spokesperson, Senate Majority Leader Mitch McConnell also appeared to voice some opposition to the extremity of Alabama's abortion law. "Leader McConnell's record has been clear for decades on this issue," The Washington Post reported McConnell's spokesperson said. "He opposes abortion except in the instance of rape, incest, or the life of the mother in is danger."