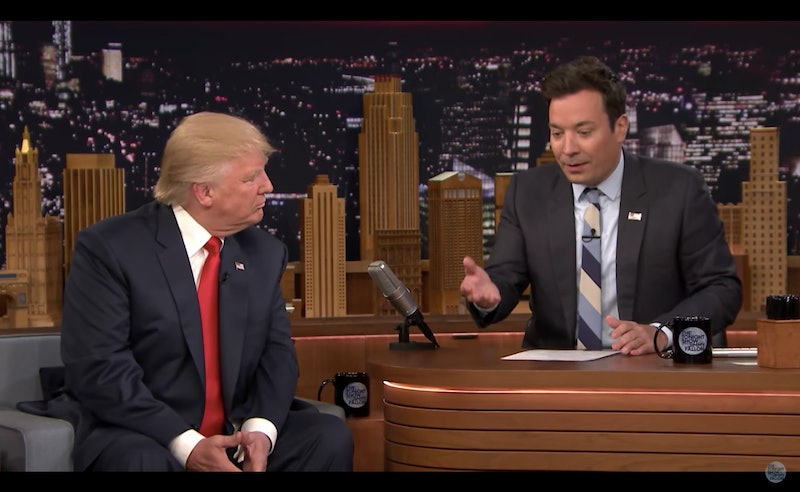 Over the weekend, President Trump took to social media to blast a late night host for again expressing regret over an interview he held with the now-president. Trump told Jimmy Fallon to "be a man" on Twitter on Sunday night — and accused the comedian of changing his tune about the controversial "hair interview" he did with Trump.

Since the interview, Fallon has expressed regret over his actions, including most recently in an interview with The Hollywood Reporter's "Awards Chatter" podcast. It was this interview that seemingly prompted Trump's reaction, with the president addressing Fallon on Twitter:

@jimmyfallon is now whimpering to all that he did the famous “hair show” with me (where he seriously messed up my hair), & that he would have now done it differently because it is said to have 'humanized' me-he is taking heat. He called & said “monster ratings.” Be a man Jimmy!

During the aforementioned THR interview, Fallon had particularly reflected on how the fallout from his Trump interview had negatively affected his staff. As the late night host told THR:

It was definitely a down time. And it's tough for morale. There's 300 people that work here, and so when people are talking that bad about you and ganging up on you, in a really gang-mentality ... You go, "Alright, we get it. I heard you. You made me feel bad. So now what? Are you happy? I'm depressed" ... I'm sorry. I don't want to make anyone angry — I never do and I never will. It's all in the fun of the show. I made a mistake. I'm sorry if I made anyone mad. And, looking back, I would do it differently.

Fallon has also previously discussed the Trump interview with The New York Times, telling the paper in 2017 that he hadn't been seeking to humanize the then-presidential candidate. "They [people] have a right to be mad ... If I let anyone down, it hurt my feelings that they didn’t like it. I got it," Fallon told The Times. "I didn’t do it to humanize him. I almost did it to minimize him. I didn’t think that would be a compliment."

The late-night host directly acknowledged Trump's tweet on Sunday evening. On Twitter, Fallon wrote that he would be donating to the Refugee and Immigrant Center for Education and Legal Services (RAICES) in Trump's name "in honor of the President’s tweet." RAICES is a nonprofit organization in Texas that provides legal assistance to thousands of immigrants every year. Fallon's donation is likely a swipe at the president's hugely controversial zero-tolerance immigration policy, which recently resulted in separations of families crossing the border into the southern United States, among other issues.

Some on Twitter commended Fallon's response to Trump's tweet. Anil Dash, the CEO of the software company FogCreek, wrote, "Ayyyy! This is a good response, Jimmy." Another Twitter user, @NickOchalek, wrote, "I've said it before, and I'll say it again, YOU'RE the man, Jimmy!!!!"

Overall the Trump "hair interview" is clearly something about which Fallon still thinks — and something he continues to wish he had conducted differently in retrospect. Now that the late night host has made a donation to take a stand against Trump's condemnation of his latest musings on the interview, it will be interesting to see if the president decides to comment further on the issue.