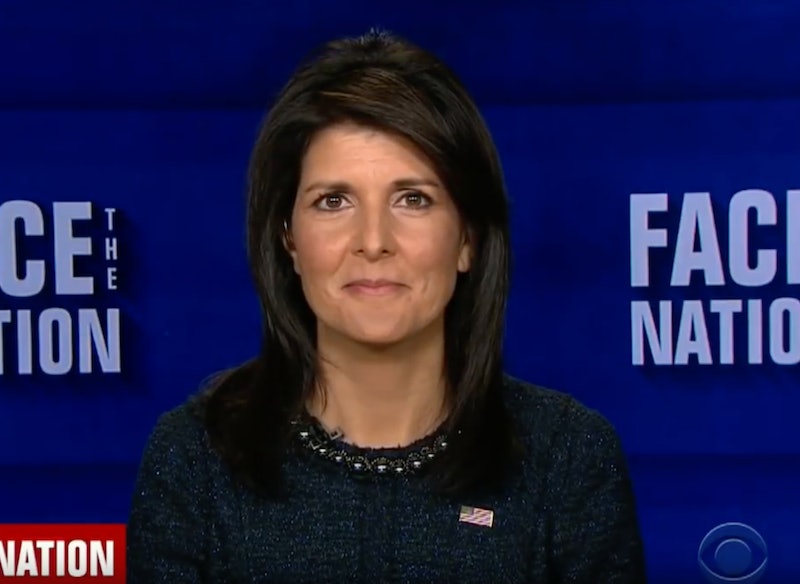 Over the past two months, dozens of high-profile, powerful men have either resigned or been fired after facing allegations of sexual harassment and/or assault. The reverberations finally reached Washington, D.C., last week with the announced resignations of three congressmen. And this apparently has the president worried about past allegations against him, which may have fueled Trump's reportedly "furious" reaction to U.N. Ambassador Nikki Haley's remark that the president's accusers "should be heard." Trump has denied all the allegations against him. Bustle has reached out to the White House for comment.

Haley appeared on CBS' Sunday morning news show Face the Nation, and spoke with host John Dickerson on a number of topics. On the issue of sexual harassment and assault allegations making waves in Washington, Haley said she was "incredibly proud of the women who have come forward."

I think we heard from them prior to the election. And I think any woman who has felt violated or felt mistreated in any way, they have every right to speak up.

The AP reports the president's advisers were "stunned" at Haley's comments, and that her words supposedly "infuriated" Trump.

The AP cited two people supposedly "familiar" with the situation who spoke on the condition of anonymity. They related that the president has become "increasingly angry" in recent days over the media attention refocusing on past allegations against him. According to the AP, Trump is saying the accusations against him and the situation he finds himself in mirrors that of Alabama Senate candidate Roy Moore.

It's a problem for the president that doesn't look like it's going away anytime soon. On Monday, three of the women who have alleged Trump sexually harassed or assaulted them held a press conference in New York where they asked that Congress investigate the accusations against Trump. Rachel Crooks, Samantha Holvey, and Jessica Leeds each made a statement outlining the details of their accusations against Trump, and ended by demanding the president be treated with the same scrutiny other D.C. pols have come under in recent weeks.

A total of 19 women have leveled allegations of sexual harassment or assault at Trump, all of which the president denies. And though many of the allegations were known before the election, Trump was voted into office prior to the sweeping impact of the #MeToo movement. Crooks, Holvey, and Leeds are hoping this moment will bring a new perspective to their stories.

The issue of how Trump has supposedly interacted with women throughout his career is causing headaches for his staff as well. Press spokeswoman Sarah Huckabee Sanders fielded a litany of questions about the allegations against the president during a White House press briefing on Monday. One journalist asked Sanders specifically about Haley's comments on Face the Nation, and Sanders responded, "The president has said himself he thinks it is a good thing that women are coming forward." She noted Trump also thinks a "mere allegation" should not be enough to wreck a career, and Sanders went on to say, "The president has denied any of these allegations, as have eyewitnesses."

Sanders said she would provide a list of the referenced eyewitnesses who supposedly corroborated the president's version of events as opposed to his accusers. That list has since been provided, and includes one man, Anthony Gilberthorpe, who claims Leeds' story that Trump groped her on an airplane never happened. The Guardian notes that Gilberthorpe has made outrageous claims in the past, including that he procured young boys for Tory MP parties in England. Two former Miss Teen USA contestants are also listed, both of whom say Trump never entered their dressing rooms while they competed in the pageant.

Given Trump's explicit tweet critiques of Sen. Al Franken, he clearly is not against the idea of sexual harassment and/or assault allegations leading to career demise. But the president is reportedly upset at the prospect of allegations against him gaining media attention, which is exactly what happened during Haley's interview on Sunday.