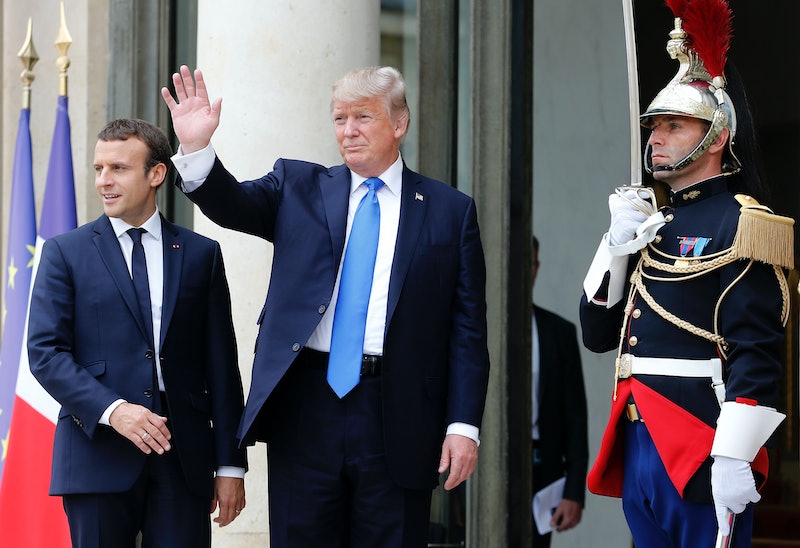 The president's trip to France was not well received by his critics, to say the least. He was teased about being afraid of the rain, criticized for his excitement upon seeing Vladimir Putin, and the French president basically called him out for being a nationalist in a speech. Now, President Donald Trump is hitting back from the White House — and he might take away your Bordeaux in the process. Trump tweeted an attack on France's wine tariffs, calling them "not fair."

The Twitter wine attack came as a part of a larger chain of tweets aimed at Emmanuel Macron, the French leader. He started off with challenging Macron's calls for a European army and said the country ought to pay more for NATO. Then he moved onto the wine:

The reaction online showed that Trump's words on wine hit closer to home to many than his tweet about the potential European army and NATO. "Ohhhh daaaaamn coming after the wine," wrote Charli James, an American journalist at France 24.

A few other journalists noted that the Trump trade war has generally hurt U.S. wine producers, and that a further tax change he's pushing could further complicate the market for them. Tal Kopan, a correspondent for The San Francisco Chronicle, wrote that the farm bill, if it passes, might provide some relief for wine producers.

Richard Rubin, a journalist with The Wall Street Journal, wrote that a tax that the Trump administration is trying to charge could hurt wine exports from the United States — the opposite of what the Treasury Department is saying, that the lack of the tax is benefiting foreign producers.

So, France's tariffs might not be the main struggle for U.S. producers. In any case, though, the wine argument was not the last one lodged against Macron and France.

"The problem is that Emmanuel suffers from a very low Approval Rating in France, 26%, and an unemployment rate of almost 10%. He was just trying to get onto another subject. By the way, there is no country more Nationalist than France, very proud people-and rightfully so!" Trump tweeted after the wine attack. "MAKE FRANCE GREAT AGAIN!" Trump added.

Tuesday's Twitter tirade was not the president's first following the meeting with European allies and Russia at the Armistice Day ceremony. He attacked fellow NATO members on Twitter Monday morning.

"Just returned from France where much was accomplished in my meetings with World Leaders," Trump wrote. "Never easy bringing up the fact that the U.S. must be treated fairly, which it hasn’t, on both Military and Trade."

This was part of a three-tweet attack on European allies, in a preview of Tuesday's France-specific one. "It is time that these very rich countries either pay the United States for its great military protection, or protect themselves...and Trade must be made FREE and FAIR!"

The wine attack fits into that same trade narrative — but for those who love a French red, it might now hit too close to home.