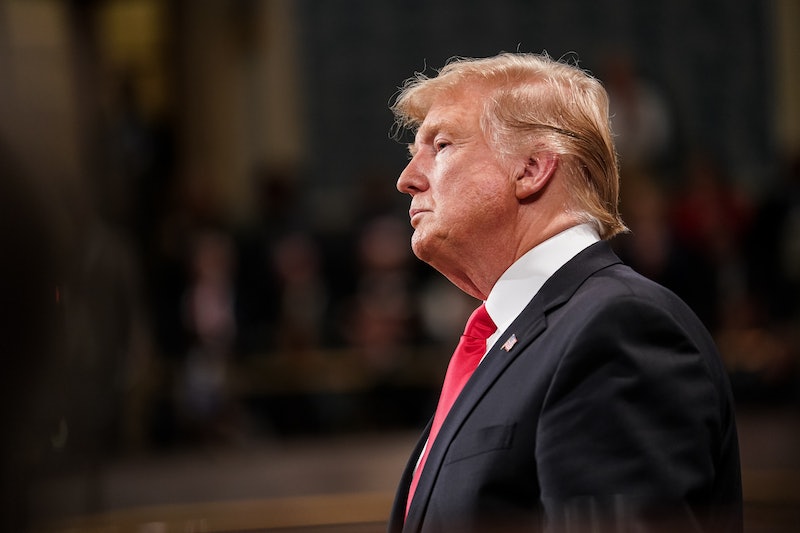 When President Donald Trump proclaimed that "together we will defeat AIDS in America" during his State of the Union address, Twitter went off. While the goal itself didn't raise alarm, HIV/AIDS activists pointed out that Trump's plan to end the spread of HIV doesn't match his track record on the issue. Not by a long shot.

Trump's full comment came between remarks on health care costs and cancer. "In recent years we have made remarkable progress in the fight against HIV and AIDS," Trump told the country. "Scientific breakthroughs have brought a once-distant dream within reach. My budget will ask Democrats and Republicans to make the needed commitment to eliminate the HIV epidemic in the United States within 10 years. We have made incredible strides. Incredible."

Many weren't buying it, to say the least. "Trumps [sic] plan is to eliminate AIDS in 10 years must be having us all die off," George Johnson, a journalist and activist, wrote on Twitter Tuesday night. Johnson went on to point out that Trump's past actions made the State of the Union announcement seem like an abrupt about-face because Trump has put the country on a backwards trajectory in terms of HIV prevention and funding since taking office.

For starters, Trump fired half of the Presidential Advisory Council on HIV/AIDS in December 2017. The other half had quit the previous June, and one former member claimed in a Newsweek op-ed that the president "simply does not care" about the issue. Health and Human Services Secretary Alex Azar just recently appointed two chairs in December 2018, but they haven't met yet.

When it comes to HIV funding, the Trump administration has proposed massive cuts multiple times. The president's Fiscal Year 2018 budget proposal included severe cuts, one of which decreased nearly 20 percent for the Centers for Disease Control and Prevention's (CDC) HIV prevention programs. At the international level, Trump moved to cut more than $1 billion from programs like President’s Emergency Plan for AIDS Relief (PEPFAR) and the Global Fund to Fight AIDS. He eventually signed a bill in December that extended PEPFAR through 2023.

In June 2018, the Trump administration began transferring millions from the Ryan White HIV/AIDS Program to fund his immigration detention programs at the border, some of which paid for refugee resettlement and child separations, Slate reported. AIDS United later put the dollar amount at $9.5 million that the administration planned to move from several federal HIV programs, according to POZ magazine.

The Trump administration has also pushed for a gag rule in the United States that would limit Title X funding to providers that don't discuss abortion as an option. If enacted, that rule would drastically reduce the number of health care providers that provide HIV tests in rural areas, as the nonprofit Funders Concerned About AIDS has pointed out.

Perhaps more well known are the Trump administration's attempts to repeal the Affordable Care Act, which provides millions of Americans with health care coverage and access — including treatments for HIV. Without the law protecting coverage for those with preexisting conditions and striking lifetime benefit caps, HIV-positive Americans would be particularly harmed.

And as recently as December, the Trump administration seemed to suggest that the National Institutes of Health's contract with the University of California at San Francisco would be terminated — or at least not renewed in full — because of its use of fetal tissue for research, The Washington Post reported. This center is working on a vaccine to prevent HIV, and many successful treatments have been tested there.

None of this is to mention Vice President Mike Pence's previous track record. He oversaw the worst HIV outbreak in Indiana's history, which wasn't helped by his opposition to needle exchange programs (which the state doesn't fund to this day). With Pence in the governor's mansion, Indiana also defunded Planned Parenthood, which led to the closure of several health centers, including one that was the only HIV testing center in the area of the HIV epidemic.

Then there's Trump's nominee for attorney general, William Barr, who in the 1990s oversaw what a federal judge called an "HIV prison camp" at Guantanamo Bay. Some 310 Haitian refugees with HIV were held there without adequate medical care, the Daily Beast reports.

Experts argue that whatever new plan the Trump administration presents could have serious flaws, given how his administration has treated vulnerable populations, as BuzzFeed News reports. Communities with some of the highest transmission numbers — trans women, Latino and black men, and people without health insurance — are the same groups Trump's policies have negatively impacted.

"According to new CDC data, around a quarter of transgender women are living with HIV. Real lives are at stake," Trans Equality tweeted Tuesday night.

Gay Men's Health Crisis similarly tweeted a quote from a 2018 AIDS United report. "Many recent immigrants are afraid to access HIV prevention and medical care, out of fear of deportation. These barriers have the potential to drive dramatic increases in new HIV cases among Latinx gay and bisexual foreign-born men," the tweet read.

The details of Trump's new plan were not made clear on Tuesday, but Health and Human Services Secretary Alex Azar said that information would be included in the president's budget when it's released in March, The Washington Post reports. The plan's expected to have a geographic basis as opposed to focusing on target groups that HIV/AIDS activists usually focus on, such as men who have sex with men or drug users. The CDC will instead focus on 48 counties, Washington D.C., Puerto Rico and rural areas with high transmission rates. Health workers will try to get people in those areas tested and on PREP — or if they test positive, on an anti-retroviral regimen.

But HIV/AIDS activists say there's far more the administration could do.