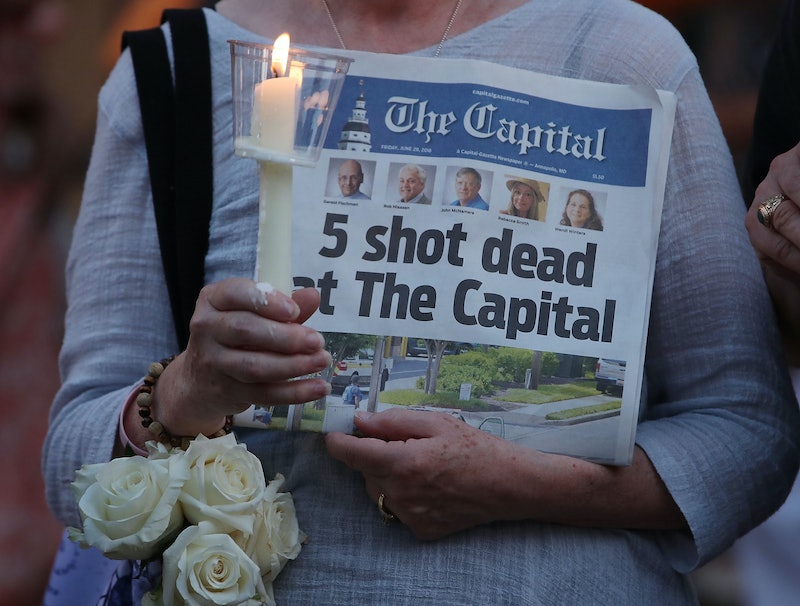 Last week, five people were killed when a gunman opened fire in an Annapolis, Maryland newsroom. On Monday, reports indicated that despite a request reportedly made by Annapolis' mayor, Trump won't lower the flag for Capital Gazette shooting victims. The mayor described the decision as disappointing.

"Obviously, I’m disappointed, you know? … Is there a cutoff for tragedy?" Buckley said on Monday, according to The Baltimore Sun. "This was an attack on the press. It was an attack on freedom of speech. It’s just as important as any other tragedy."

Whether or not Trump offered an explanation for why he reportedly declined the mayor's request is not clear. While the American flag was not lowered on the national level to honor the victims, Maryland Gov. Larry Hogan ordered that state flags be lowered from Friday night until Monday, July 2.

"It’s not as noticeable when a state flag is down but you still have your main flags at full mast," the mayor told the Sun.

After the Annapolis attack, President Trump faced swift and biting backlash from many journalists around the country. Though he offered his thoughts and prayers immediately after the tragedy, many recalled the countless times that Trump, as both the president and as a candidate, trashed members of the press, often describing them as the "enemy of the people."

CNN also aired a montage of times in which Trump has name-called the media, described them as dishonest, or called them scum. The latter was from a 2015 campaign event in New Hampshire, during which then-candidate Trump described the press as "horrible people."

During the event, he conceded that he didn't think all members of the press were awful. He clarified that he believed it was only half.

"Some of the people in the press are honorable," Trump continued. "But you’ve got 50 percent who are terrible people."

The president has repeated similar refrains since being officially elected. Those comments were shared and rehashed following the seemingly targeted attack against employees of the Capital Gazette.

After offering his thoughts and prayers, Trump pledged to fight violent crime.

"Journalists, like all Americans, should be free from the fear of being violently attacked while doing their job," Trump said, according to Politico. "My government will not rest until we have done everything in our power to reduce violent crime and to protect innocent life."

Flag lowerings are not a guarantee after mass shootings. While former President Obama did opt to lower the flag very frequently, relative to other presidents, it's not a mandatory practice. Obama did choose to call for the lowering of the flag after five servicemen were killed in Chattanooga in 2015.