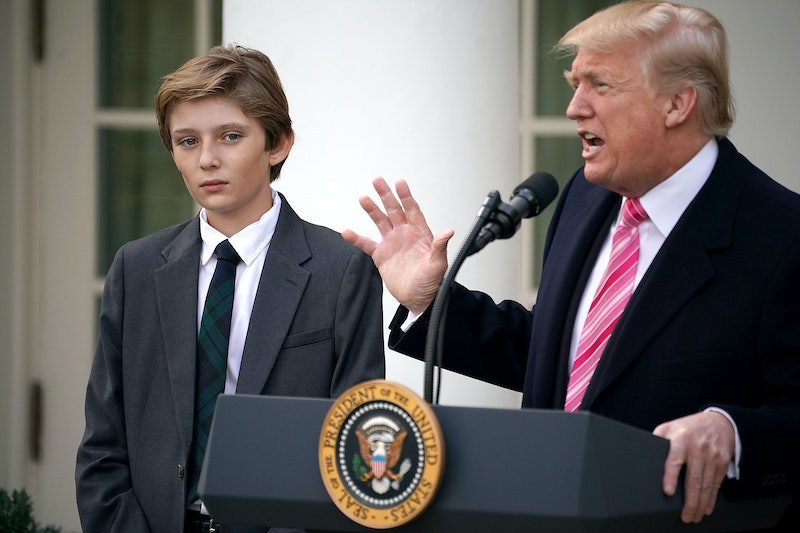 As much as he's a fan of the game, President Donald Trump wouldn't want to see his son, 12-year-old Barron Trump on the field. While discussing a range of issues such as foreign policy and the potential for a second government shutdown in an interview on CBS News' Face the Nation, Trump said he wouldn't steer Barron toward playing football as he thinks the sport is "dangerous."

"If he wanted to? Yes," Trump said when asked by Face the Nation host Margaret Brennan if he would let Barron play football. "Would I steer him that way? No, I wouldn't."

The president, who has previously appeared to complain about the NFL's attempts to make the sport less violent, went on to say he felt the sport was dangerous. "I just don't like the reports that I see coming out having to do with football," he said. "I mean, it's a dangerous sport and I think it's really tough,"

In 2017, Trump complained that the NFL's decision to toss players from games for overly aggressive tackles meant football was "not the same game" it once was. "They're ruining the game," NBC News reported he said in September 2017 at a rally in Huntsville, Alabama.

While speaking with Brennan in an interview set to air Sunday ahead of the Super Bowl, Trump said he didn't think improvements in the safety equipment worn by football players had fully addressed the sport's dangers. "I thought the equipment would get better, and it has," he said. "The helmets have gotten far better but it hasn't solved the problem."

According to People magazine, the first NFL player to ever be diagnosed with brain degeneration caused by repeated head trauma — a condition known as chronic traumatic encephalopathy (CTE) — was Mike Webster of the Pittsburgh Steelers in 2002. In 2017, The New York Times reported that a neuropathologist had found evidence of CTE in all but one of the 111 NFL players' brains she'd studied.

It's worth noting that the NFL has said it believes there is a link between the aggressive and violent nature of football and degenerative brain diseases like CTE.

While living, people with CTE may experience confusion, depression, aggression, impaired judgement, and memory loss, to name only a few symptoms. For now, however, the condition can only definitively be diagnosed postmortem, although researchers said in 2017 that they'd made some headway in identifying the disease in a living person.

Of course CTE isn't the only risk present to football players. Multiple concussions can also lead to serious risks, according to the Center for Disease Control and Prevention, traumatic brain injuries like a concussion can cause depression, anxiety, personality changes, aggression, acting out, and social inappropriateness as well as issues with memory, reasoning, understanding, sight, and communication.

Trump told Face the Nation he's not alone in wanting to keep his son off the football field. "I hate to say it because I love to watch football," the president told Brennan. "I think the NFL is a great product, but I really think that as far as my son — well I've heard NFL players saying they wouldn't let their sons play football, so, it's not totally unique. But I would have a hard time with it."