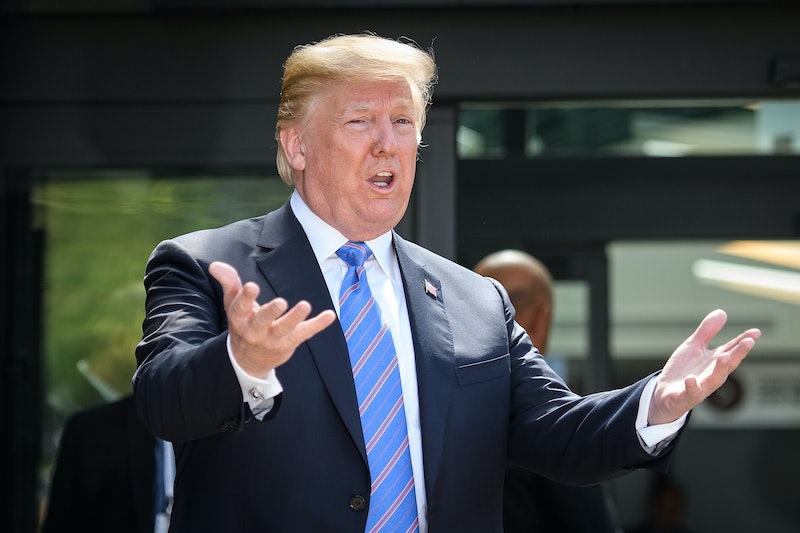 June 19 is Juneteenth, the holiday marking the emancipation of the United States' last slaves. It's celebrated each year to remember the moment when Abraham Lincoln's Emancipation Proclamation reached the last remaining slave state — Texas — thereby officially ridding the nation of slavery. Donald Trump issued a Juneteenth statement honoring the day, and it's very similar to the statement that he issued on Juneteenth in 2017.

Both statements begin with the president and the first lady sending their best regards to "those celebrating Juneteenth," a statement which might imply the two of them are not themselves celebrating the holiday. The second paragraph of both describes the historical situation that led to Juneteenth being celebrated as a holiday.

"On this day in 1865, Major General Gordon Granger of the Union Army arrived in Galveston, Texas, to declare the end of the Civil War and issue a long-awaited order freeing the remaining slaves in Texas," the second paragraph of this year's statement reads. "Although President Abraham Lincoln had issued the Emancipation Proclamation more than two years earlier, the freedom of most slaves depended on the advancement of the Union Army, which brought with it enforcement of the Proclamation."

Though President Lincoln issued the Emancipation Proclamation in 1863, news traveled slowly from Washington, D.C., to the southern states. More than two years later, on June 19, 1865, Major General Gordon Granger stood on the Ashton Villa balcony in Galveston, Texas, to deliver the belated message of the then-deceased President: All slaves were free.

The two statements go in different directions for much of the third paragraph, which focused this year on the freed slaves who fought for the Union army during the Civil War:

This historic moment would not have been possible without the courage and sacrifice of the nearly 200,000 former enslaved and free African Americans who fought for liberty alongside more than 2 million Union servicemen. These brave individuals fought to defend the God-given rights of those unjustly held in bondage.

In 2017, the third paragraph noted the "soulful festivities and emotional rejoicing" brought on by the proclamation in Galveston, and ended by remembering the "Nation’s fundamental premise that all men and women are created equal." This sentiment doesn't go forgotten in the 2018 statement, which in fact ends on that exact note.

"Today and every day, we recommit ourselves to defending the self-evident truth, boldly declared by our Founding Fathers, that all people are created equal," the 2018 statement's final line reads.

In 2017, Trump's Juneteenth statement ended by "[honoring] the countless contributions made by African Americans to our Nation and [pledging] to support America’s promise as the land of the free."

In 2018, then, the beginning of the final paragraph echoes this statement, with an additional mention of the slaves' suffering:

Overall, though, the message and layout of the White House's 2018 Juneteenth statement is very similar to what they put out in 2017. They both focus on the historical moment and treat that moment as an end of the suffering that slavery brought. As noted historian Henry Louis Gates Jr. laid out for PBS, though, the emancipation of the slaves in Texas that happened on June 19, 1865, was only the beginning of a long — and as yet far from finished — journey toward equality in America.