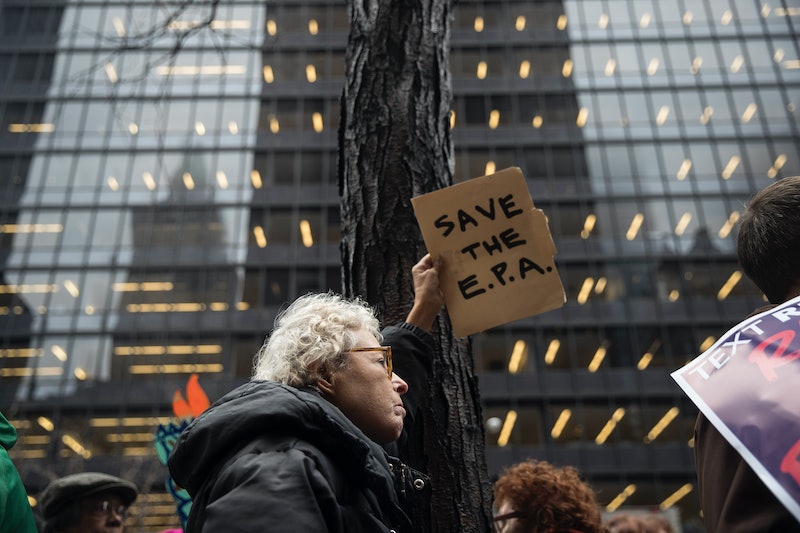 After its release on Monday, it didn't take long for a number of publications to notice that Trump's 2020 budget proposal would cut funding from a big handful of departments. Per The Washington Post, the proposed budget would cut over $845 billion from Medicare over the next 10 years, eliminate student loan forgiveness, and more. But in spite of all of these cuts, the proposed plan (which still has to be passed by Congress) would be the most expensive budget in U.S. history.

According to The New York Times, the cumulative costs for the budget would be $4.75 trillion, a record-breaking number. Via The Washington Post, the new budget seeks to cut 31 percent of the Environmental Protection Agency's budget, 24 percent of the State and USAID budget, and a ranging percentage of the following agencies and departments, as well: Transportation, Housing and Urban Development, Agriculture, Interior, Health and Human Services, Education, Energy, Labor, Justice, NASA, and Treasury.

The select few areas of government that would be gaining funding in this new budget plan would be Defense, Homeland Security, and Veterans Affairs, according to The Washington Post. In total, the budget for the Department of Defense would amount to $718 billion. The publication notes that the proposed budget also allocates an additional $8.6 billion in funds for the border wall, bringing total costs for the wall over $15 billion.

Per The New York Times, it's highly unlikely that this budget, as it currently stands, will be approved by the Democrat-controlled House. The publication notes that Sen. Chuck Schumer called the budget a “a gut punch to the American middle class," and said that Trump's proposed cuts to such initiatives as Medicare and Medicaid “are devastating, but not surprising."

Schumer is right — Trump's priorities within this proposed budget plan are on brand with his previous political initiatives. Throughout his time as president, Trump has aggressively pursued anti-environment and pro-coal initiatives, The New York Times reports; in fact, he has all but erased the regulations and environmentally conscious legislation carried out by the Obama administration, the publication notes.

What's more, the Trump administration has also consistently worked at eroding the funding and overall role of science-related agencies under the government umbrella; you can see a full timeline of all of the anti-science "attacks" that have taken place during the Trump presidency, per the Union of Concerned Scientists.

Lastly, it's no surprise that the proposed budget would work to further boost military spending while pulling back on initiatives like the Supplemental Nutrition Assistance Program; on the same day that his budget proposal was released, Trump gave an interview to Breitbart in which he said he doesn't want any immigrants coming into the country who may need welfare. He said in part, “I don’t like the idea of people coming in and going on welfare for 50 years, and that’s what they want to be able to do — and it’s no good."

In his opening address within the budget proposal, POTUS laid out what he considered to be his "highest duty" — and it might not surprise you that this duty is in relation to the border wall. Trump writes in part, "As President, my highest duty is the defense of our Nation — which is why finishing the border wall is an urgent national priority."