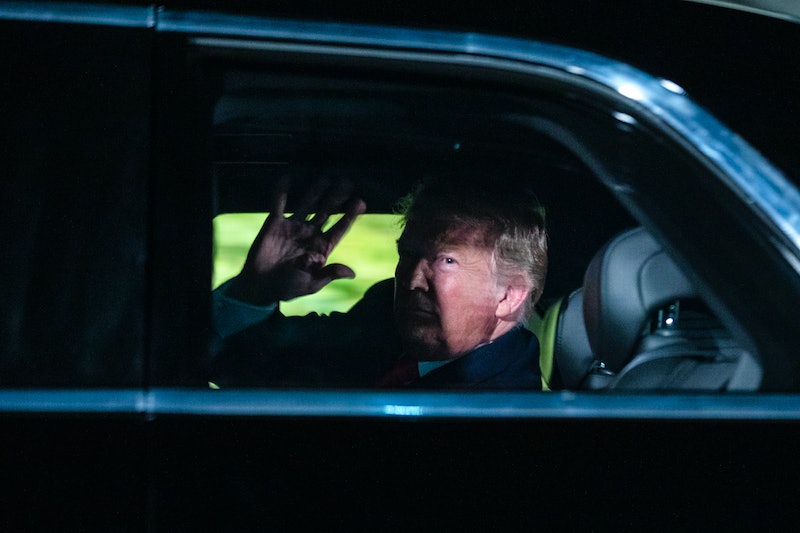 Trump may be officially kicking off his reelection campaign to an audience in El Paso, but a few lucky donors will be spending time with him leading up to the event. According to CNN, Trump's holding a 2020 campaign fundraiser before his El Paso rally, where people will have the opportunity to get up close and personal with the president. Specifically, CNN reports that donors will be able to get a photo with POTUS, for the casual price of $15,000. Bustle has reached out to the White House for comment.

Not much else is known about the fundraising event before the rally on Monday night. However, one thing is clear: Trump's photo-op value has increased since he became president, as you would probably expect. In the summer of 2016, while he was running for president the first time around, the political newcomer was offering photo opportunities to donors for $10,000, according to The Seattle Post-Intelligencer.

So far, the president has been relatively quiet about his reelection bid, which is pretty normal for a sitting president, since they have direct presidential work to attend to on a daily basis. Therefore, any of Trump's comments in El Paso about his 2020 campaign will reflect some of the first hints POTUS has given the general public about what type of reelection campaign he's going to run.

Though Trump's reported $15,000 photo opportunity may sound extravagant, it's nowhere near unusual. During Obama's reelection campaign in 2012, a series of fundraising packages were offered to donors in Hollywood, according to The Hollywood Reporter. The most expensive package, called the "platinum package," required a whopping $71,600 per couple, which would give them two seats at a five-event local speaker series, entry to a private reception with Michelle Obama with a photo opportunity, and another dinner with the president at a private residence.

The cheapest package, the "silver package," was the same cost as Trump's photo op: $15,000, per The Hollywood Reporter. It's worth noting that that package offered a photo opportunity, access to a luncheon with the first lady, and general admission to a fundraising event with the president. It's unclear if Trump's "package" includes anything other than a photo.

Hillary Clinton's presidential campaign was slightly more budget-friendly than Obama and Trump's reelection campaigns. In early 2016, Clinton held three fundraisers in Los Angeles, one of which included a fundraiser at a private residence in which individuals donating $2,700 were able to take a picture with Clinton. The cost of entry to the event was $1,000, according to The Wrap, so the total cost for a picture with Clinton was $3,700.

Though Trump's 2020 campaign is only getting started, his reelection team has been working full steam for a while now. In the past few weeks, his campaign has spent just under $800,000 in Facebook ads. That's compared to the $194,000 that Harris spent in the week she launched her election campaign, or the $99,000 that Elizabeth Warren has spent over the last several weeks, according to Facebook's Ad Library Report as reported by Tara McGowan, an opinion contributor for The Hill.