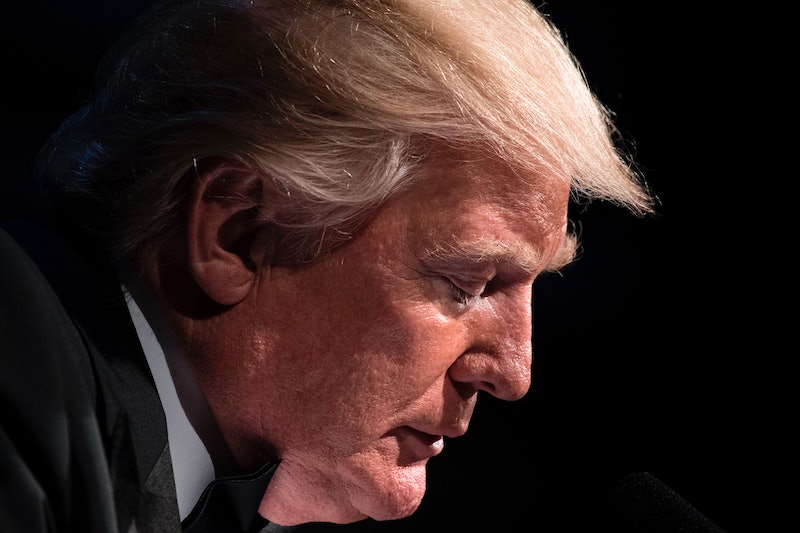 Back in 2005, Donald Trump probably didn't imagine that certain bits of his commentary would come back to haunt him 11 years later. The recorded statements, made public by The Washington Post in 2016, caught Trump revealing his candid thoughts — specifically when it came to touching women. In recorded bits from Access Hollywood tapes, Trump can be heard bragging about being able to essentially grab women's genitals without permission to radio host Billy Bush. Although he apologized for his remarks in a public statement last year, it's clear that Trump's Access Hollywood tapes are still damning — and relevant — as ever.

Exactly one year ago, The Washington Post shared Trump's recorded remarks with Bush wherein he boasts about touching women without their explicit consent. While talking about one woman, Trump told Bush, "I moved on her actually. You know, she was down on Palm Beach. I moved on her and I failed. I’ll admit it. I did try and f*ck her. She was married."

Trump went on to say, "You know, I’m automatically attracted to beautiful — I just start kissing them. It’s like a magnet. I just kiss. I don’t even wait. And when you’re a star, they let you do it. You can do anything."

"Grab them by the pussy. You can do anything," Trump gloated. Shortly after The Post's report went live, Trump recorded a video of himself saying that he's "not perfect" while issuing a lopsided apology which ended up with him calling for scrutiny against Hillary Clinton.

The anniversary of the Post's damning report is worth noting here. Only a few days ago, Trump criticized film producer Harvey Weinstein after he was accused of sexually harassing colleagues in a New York Times report published on October 5. In response to the allegations, Weinstein apologized for his behavior while noting that some of the accusations were "patently false." On Sunday, Weinstein was removed from The Weinstein Company under the collective decision of the company's directors Robert Weinstein, Lance Maerov, Richard Koenigsberg, and Tarak Ben Ammar.

When a reporter asked Trump about the timing of his criticism for the film mogul and the president's very own bragging about assaulting women, he shrugged it off as "locker room talk." Trump's flippancy, lack of self-reflection, and remorse are the reasons why those Access Hollywood tapes remain despondently relevant.

If a president feels such blatantly scarce regret over his own remarks — that is, openly bragging about grabbing women by the genitalia — then a recorded tape from 2005 isn't just an embarrassing gaffe from a decade ago. Openly passing off his lewd commentary from 2005 as harmless "locker room talk" means that Trump is incapable of critical introspection — a crucial trait a president meant to guide a nation needs. It also means, unsurprisingly, that Trump in 2017 is pretty much the same Trump from 2005.

The idea that those Access Hollywood tapes are still relevant isn't an outlandish and singular assertion. Feminists are perennially aware of how purported "locker room talk" like Trump's leads to young girls and women getting hurt by predators. Trump's misogyny is so pertinent that one women's advocacy group known as UltraViolet has made sure that the public won't forget his "grab them by the pussy" comments. In full view of pedestrians, everyday traffic, and tourists, the group put a livestream of Trump's comments on the National Mall in Washington, D.C., on Friday. All it reads, in broad daylight, are Trump's 2005 comments.

"We really just want to remind the American people who Donald Trump is, and who he explicitly told us who he was in this videos: A self possessed, proud sexual predator," one member told CNN.

As long as the president passes his predatory behavior off as innocuous "locker room talk," he gives no other choice to Americans but to believe that he is decidedly unconcerned about misogyny and clearly unaware of the truth: you are who you are when you think no one can hear you.