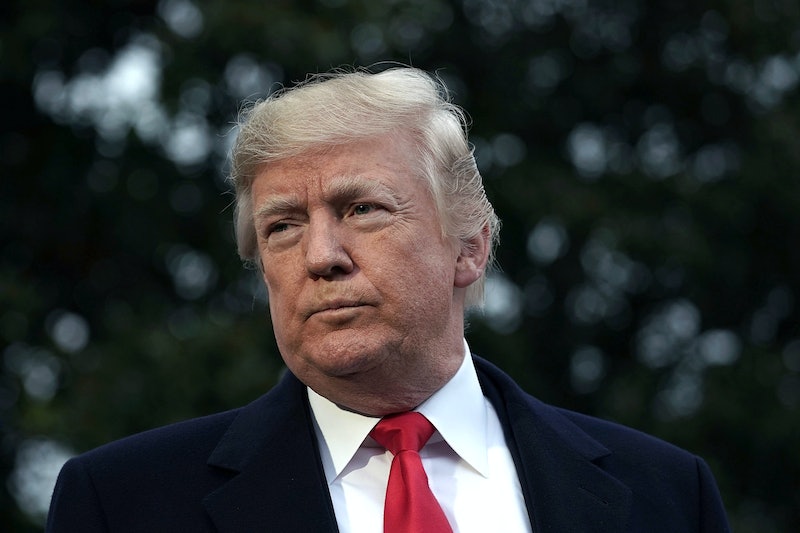 "We've already stopped the Trump administration from blocking one young woman's abortion," said Brigitte Amiri, senior staff attorney with the ACLU Reproductive Freedom Project, in a statement. "But the Trump administration is relentless in its cruelty, blocking abortion access for the most marginalized people in our country. It's unreal that the federal government is trying to force more young women to continue their pregnancies against their will." Bustle has reached out to the ACLU for comment.

The two teens seeking abortions were deterred by the Office of Refugee Resettlement, according to the ACLU. They asked their respective doctors and shelters for abortions, but the government has not granted them access. In a similar case in October, Jane Doe was cleared by a federal appeals court to obtain an abortion after the Trump administration refused to let her do so. She got the procedure two weeks before the 20-week deadline that would have made the abortion illegal in Texas.

The ACLU has asked U.S. District Judge Tanya S. Chutkan, the same federal judge who ruled in favor of Jane Doe and granted her access to an abortion, to order the Trump administration not to interfere with the other two teenagers' abortions. The judge has agreed to a hearing on Monday.

In the court proceedings for Jane Doe, Chutkan said she was "astounded" that the government was blocking the teen from getting an abortion, and that by doing so, the Trump administration was leaving her with only two options—voluntarily return to a country from which she fled or carry an unwanted pregnancy to term.

National attention has turned to whether or not immigration status has to do with a woman's access to an abortion — a right protected by the due process clause of the 14th Amendment. While Chutkan wrote in her decision that immigration status has no bearing on Jane Doe's constitutional rights, and also barred the government from forcing the teen to reveal her abortion decision to others, the judge didn't apply the ruling to other minors in federal custody. This leaves other undocumented women, including the two teens currently blocked by the Trump administration, vulnerable to the health risks associated with being forced to carry pregnancies against their will.

Jane Doe's case, and those of the two other teenagers, is currently pending before the Supreme Court and is the first instance that the Trump administration has asked them to consider an abortion-related case.

The Justice Department has attempted to prevent Jane Doe's ruling from applying to similar cases in the future, filing a petition stating that because the Supreme Court wasn't able to weigh in on the case before the appeals court decision, the Oct. 24 order allowing Jane Doe to get an abortion shouldn't serve as a precedent for other cases. The DOJ has also claimed that the ACLU lawyers provided misleading information about the timing of Jane Doe's abortion in order to prevent the Supreme Court from ruling on the case.

The ACLU had intended to file a class-action lawsuit on behalf of Jane Doe and other women in similar circumstances, but the judge has yet to rule on the case's broader implications.

Jane Doe, a 17-year-old who came to the U.S. from Central America, spurred the first major abortion battle during Trump's presidency. According to the ACLU, the Trump administration has been requiring pregnant women to go to religiously affiliated "Crisis Pregnancy Centers" in order to have a "medically unnecessary sonogram" in hopes that they would carry their pregnancy to term.

“No one should be shamed for making the right decision for themselves,” Doe said in a statement released by the ACLU. “I would not tell any other girl in my situation what they should do. That decision is hers and hers alone."

As the ACLU continues to build its case, and the Trump administration attempts to thwart access to abortions for women, the federal courts decision that cleared the way for Jane Doe could have resounding implications for other young undocumented women in federal custody.