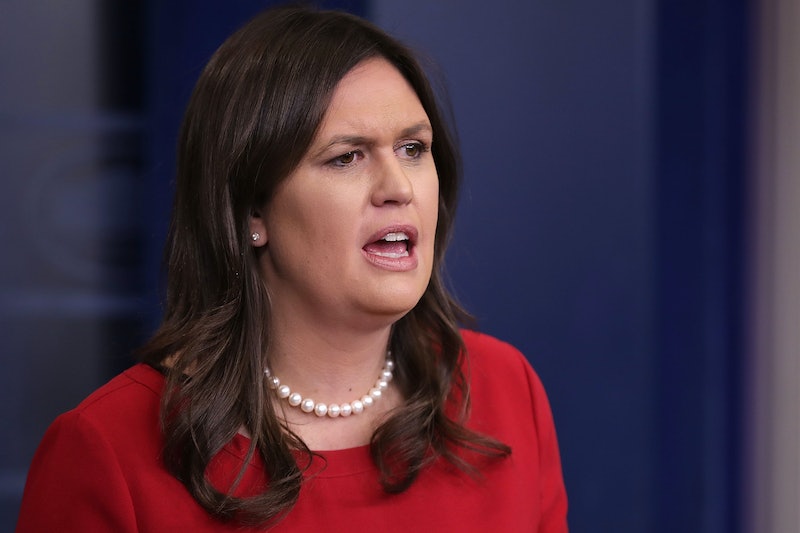 The White House seems to be doubling down on Donald Trump's inflammatory immigration comments. Less than a day after Trump called some immigrants "animals," Sarah Huckabee Sanders defended the president in a press briefing, saying that the president's comments didn't "go far enough."

"The president was very clearly referring to MS-13 gang members who enter the country illegally and whose deportations are hamstrung by our laws," Sanders told reporters on Thursday. "This is one of the most vicious and deadly gangs that operates by the motto of 'rape, control, and kill.' If the media and liberals wants to defend MS-13, they’re more than welcome to," she said.

"Frankly," she added, "I don’t think the term that the president used was strong enough."

Without giving specifics about the incidences, Sanders shared a list of graphic crimes she said MS-13 gang members committed. "MS-13 has done heinous acts. It took an animal to stab a man a hundred times and decapitate him and rip his heart out. It took an animal to beat a woman they were sex trafficking with a bat 28 times, indenting part of her body. It took an animal to kidnap, drug, and rape a 14-year-old Houston girl," she said, reiterating that she doesn't think "the term 'animal' goes far enough." Sanders wrapped up her comment by saying that she hoped Trump would continue to use his platform to highlight these "horrible, horrible, disgusting" gang members.

In his Wednesday comments, Trump did not explicitly specify if he was talking about undocumented people in general or MS-13. During an immigration talk with Fresno County Sheriff Margaret Mims, Trump said, “We have people coming into the country, or trying to come in, and we’re stopping a lot of them — but we’re taking people out of the country.”

The president went on, “You wouldn’t believe how bad these people are. These aren’t people. These are animals. And we’re taking them out of the country at a level and at a rate that’s never happened before. And because of the weak laws, they come in fast, we get them, we release them, we get them again, we bring them out. It’s crazy.”

Almost instantly, the president’s comments received criticism while a few, including his son, defended him. Soon after his father issued his controversial comments, Donald Trump Jr. has retweeted a bunch of defenses of Trump from other conservative commentators.

Trump Jr. retweeted a New York Times' tweet on Trump's comments and said that his father was being taken out of context, "Weird what happenes [sic] when you take out the first sentence specifically talking about MS-13 gang members. Not surprising that you would conveniently ignore that but I would think your readers deserve the truth, not your chosen narrative. How does this even pass for 'journalism'?"

In another instance, White House counselor Kellyanne Conway tweeted that those criticizing Trump for his comments owed him an apology.

While Trump Jr., Conway, and other conservatives have defended Trump, other people have condemned the president's description and said that he did not make it clear whether he was castigating gang members or undocumented people. And the difference is crucial, according to observers. California Democrat Rep. Eric Swalwell tweeted, "If you are a decent person and were in a meeting where @realDonaldTrump called immigrants 'animals,' you will denounce him NOW. Otherwise, what makes you any different?"

For many people, Trump's Wednesday comments were no different than the language he has used for immigrants on the presidential campaign trail. In 2015, Trump called Mexicans "rapists" who were "bringing crime" to the United States and also called for a "complete" ban on Muslim immigration. There's also his plan to build a "big, beautiful" border wall. Given such an inflammatory track record, it's no surprise that people have interpreted Trump's recent comments as yet another bout of anti-immigrant sentiment from the president.