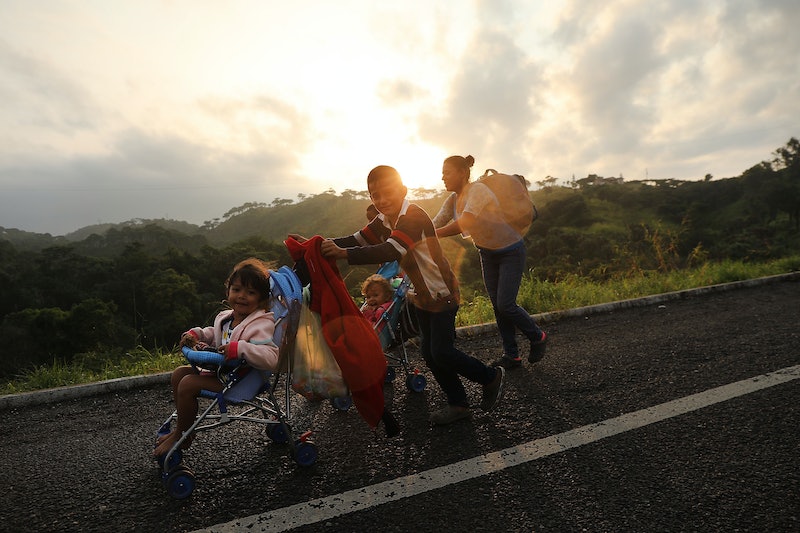 As those in the migrant caravan begin to arrive at the U.S. border, a federal judge ruled late on Monday that Trump's asylum ban cannot be enforced — at least for now. The U.S. District judge, Jon Tigar, issued a temporary restraining order to stop the administration from denying asylum requests to those who don't cross the U.S. border at legal checkpoints.

On Nov. 9, Trump released a proclamation declaring that migrants who seek to cross into the United States at unofficial border crossings would not be eligible to claim asylum. Trump's announcement came amidst news that those traveling in the migrant caravan from Central America plan to seek asylum when they arrive at the U.S. border, Time reported.

Following Trump's declaration, the American Civil Liberties Union and the Center for Constitutional Rights sued the administration, arguing the rule violated U.S. law. The Immigration and Nationality Act (INA) of 1965 asserts that any migrant who arrives in the United States, "whether or not at a designated port of arrival," can apply for asylum, as USA Today described.

Baher Azmy, a lawyer for the Center for Constitutional Rights, referenced this notion when speaking with the Associated Press on Monday. “Individuals are entitled to asylum if they cross between ports of entry,” he said. “It couldn’t be clearer.”

However, the Trump administration has argued that the president can put restrictions on asylum for reasons of sovereignty and national security, as the Boston Globe reported. The outlet noted that Trump's administration used a similar argument before the Supreme Court when it ruled in favor of upholding a revised travel ban on individuals from several predominantly Muslim countries.

In issuing the temporary restraining order in the case, USA Today reported that Judge Tigar specifically cited the INA in his decision. As the judge wrote:

The rule barring asylum for immigrants who enter the country outside a port of entry irreconcilably conflicts with the INA and the expressed intent of Congress ... Whatever the scope of the President’s authority, he may not rewrite the immigration laws to impose a condition that Congress has expressly forbidden.

The Boston Globe reported that many migrants do not cross the border at official checkpoints because of the lengthy (potentially weeks long) wait at these checkpoints. This waiting period often involves hardship, as some migrants are forced to take shelter in tents for weeks along the border. Waiting at the border can place migrants, who are often fleeing violence in their home countries, at a continued safety risk. As court filings noted (via the Boston Globe):

These delays in processing asylum seekers can be life-threatening, as individuals are often vulnerable to violence and exploitation while they wait to be processed ... Even shelters outside ports of entry are not always safe, as cartels often infiltrate them.

The Trump administration is prohibited from enforcing its asylum proclamation until the trial for the case begins on Dec. 19, as USA Today reported. Thus, the restraining order potentially paves the way for those in the migrant caravan who arrive in the United States ahead of this date to seek asylum at both official and unofficial border crossings. The Trump administration has not yet commented publicly on the judge's ruling, though it can seek to appeal the restraining order.