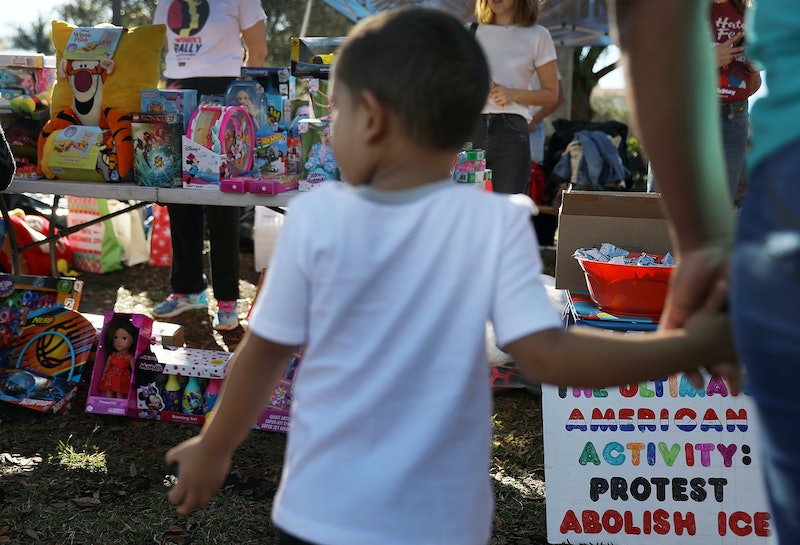 Back in June, then-Attorney General Jeff Sessions took steps to disqualify many of the refugees fleeing violence in Southern Mexico and Central America from seeking asylum in the United States. On Wednesday, though, a federal judge struck down the asylum policy for domestic violence survivors and those persecuted by gangs that disproportionately affected women.

The judge found that Sessions' policies were "inconsistent with the intent of Congress," which had written and passed both the Refugee Act and the Immigration and Nationality Act. Federal law lays out that asylum seekers must fear persecution based on race, religion, nationality, political opinion, or membership in a particular social group.

In June, Sessions attempted to explicitly exclude domestic violence and gang violence survivors, saying they were not members of a particular social group. "The mere fact that a country may have problems effectively policing certain crimes—such as domestic violence or gang violence—or that certain populations are more likely to be victims of crime, cannot itself establish an asylum claim," Sessions wrote in his memo.

That resulted in many would-be asylum seekers being deported before they could bring their asylum claim to court. The way federal asylum law is written, migrants must pass a "credible fear" screening when they arrive to the country. In an interview, an asylum officer asks a series of questions to see whether the refugee has a basis for their asylum claim, and if so, they are allowed to stay and pursue their case in court.

If not, they are deported — like the plaintiffs in the lawsuit, 12 adults and children. The judge said in his ruling that these people were deported based on Sessions' policy that excluded domestic violence and gang violence as a basis for their fear. That, the judge found, was unlawful "because it is the will of Congress — not the whims of the executive — that determines the standard for expedited removal."

The judge said that Sessions' policy "to deny most domestic violence or gang violence claims at the credible fear determination stage is fundamentally inconsistent with the threshold screening standard that Congress established: an alien’s removal may not be expedited if there is a ‘significant possibility’ that the alien could establish eligibility for asylum."

Then, because the plaintiffs did not receive a fair hearing in their credible fear interview with asylum officers, the judge ordered the government "to return to the United States the plaintiffs who were unlawfully deported and to provide them with new credible fear determinations consistent with the immigration laws."

The way the ACLU interpreted the lawsuit, this would apply to "anyone who was wrongfully removed under this unlawful policy." The group wrote on Twitter that all migrants deported under the policy must be brought "at no expense to them, back to the United States so that they can pursue their asylum claim."

Jennifer Chang Newell, managing attorney of the ACLU’s Immigrants’ Rights Project and the lawyer who argued the case, Grace v. Sessions, said in a statement provided to The National Law Journal that the decision was a "defeat" to the Trump administration's attempts to deny the rights of asylum seekers.

"The government’s attempt to obliterate asylum protections is unlawful and inconsistent with our country’s longstanding commitment to provide protection to immigrants fleeing for their lives," Chang Newell said in the statement.

The Justice Department has asked for a stay of the ruling until it appeals to the U.S. Court of Appeals for the D.C. Circuit.