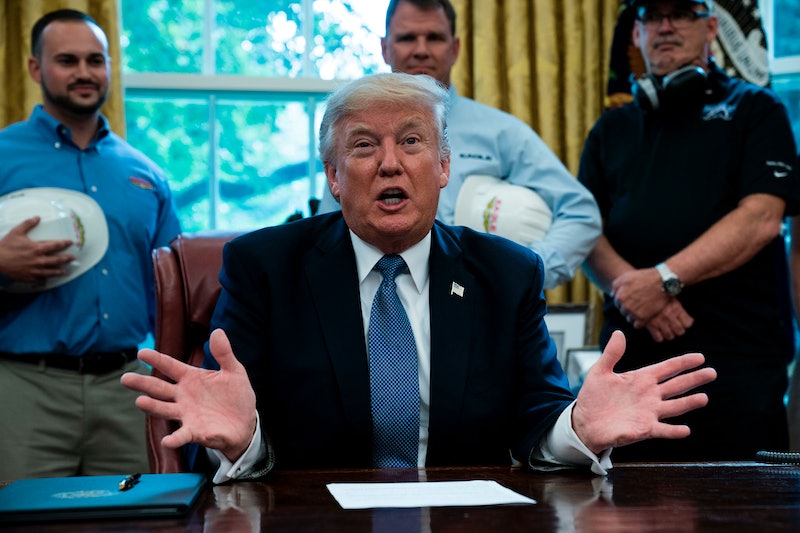 Days after House Republicans voted to ban abortions after 20 weeks, the Trump administration announced that employers will now be allowed to deny birth control coverage to their workers for "moral" reasons as well as religious ones. That's quite the one-two-punch, and as one Twitter user pointed out, the combination of policies speaks volumes about the GOP's views on pregnancy, motherhood, and American women in general.

The new contraception policy comes courtesy of the Department of Health and Human Services, which released guidelines Friday that will reduce American women's access to birth control. The first rule states that employers with "sincerely-held religious beliefs" will be allowed to exclude contraceptive coverage from company health plans, while the second extends this exemption to businesses that oppose contraception "on the basis of moral conviction which is not based in any particular religious belief." In conjunction, these two new rules effectively roll back one of Obamacare's signature policies — the contraception mandate.

Incidentally, the Trump administration had given its blessing to a 20-week abortion ban just days before unrolling the new contraception policy, and tweet from comedian Ben Siemon illustrated just how sinister this combination of policies is, and what it reveals about the GOP's priorities.

"Remember when they passed that aboriton law and took away our birth control in the same week?" Siemon wrote. The tweet includes a screenshot from The Handmaiden's Tale, the dystopian television show about a future where women are considered property of the U.S. government and valued solely as vessels for human reproduction.

To be clear, the point isn't, "The Handmaiden's Tale has become indistinguishable from reality!" That's patently not true. But Siemon's tweet illustrates that we've taken steps backward.

Many opponents of abortion rights will say that they find the procedure loathsome and reprehensible — tantamount to murder, in their eyes — and claim that they simply desire to reduce the number of abortions that are performed. A great way to reduce abortions, as many studies have shown, is to expand access to contraception: The Guttmacher Institute found in 2016 that birth control availability and use is highly correlated with fewer unplanned pregnancies, which, in turn, is correlated with a reduction in abortion rates. It's not hard to figure that one out: When you make birth control more accessible, fewer women get pregnant without having intended to, resulting in fewer abortions.

And yet many of opponents of abortion access also oppose expanded contraception access. The Trump administration made this very clear when, in the course of one week, it both promoted a 20 week abortion ban and instituted new rules that reduce contraceptive access through the new HHS rules.

This begs the question: Why in the world would folks who want to reduce abortion rates also oppose expanded access to contraception? After all, the latter accomplishes the former. The answer is that perhaps, many of these folks care more about promoting a culture of motherhood than they do reducing abortion rates. Criminalizing abortions while at the same time limiting birth control access produces one outcome, and one outcome only: more women giving birth.

This is where the Republican Party begins to look suspiciously like the government in The Handmaiden's Tale.

No, it's not a literal 1:1 comparison. Still, both with the GOP and in the hit television show, you have a ruling party that appears to value women primarily as a means of producing babies, and which is willing to limit the personal rights and freedoms of women in order to ensure that more babies are birthed. Remember that many Republicans, in addition to opposing abortion rights and birth control access, also support abstinence-only education — which, in practice, leads to more teenagers getting pregnant. It's very difficult to look at any party that supports this trio of policies and conclude that their goal is anything other than increasing the number of women who — by their choice or not — end up giving birth.

It's unclear exactly how many women will be impacted by the new contraception policy, but the answer is probably, "a lot." Ever since the Affordable Care Act required employers to offer contraceptive coverage to their workers, the share of female workers who pay for their own birth control pills plunged from 21 percent to under 4 percent, according to the Kaiser Family Foundation. That's a huge reduction in women's financial burdens, but much of that progress will be undone now that HHS has essentially given employers the green-light to exclude contraception from company health plans.

When assessing a politician or party, it's always important to look at the totality of their policy positions, not just on or two. And in totality, it sure looks like Trump and the GOP's goal is not to reduce abortions or unwanted pregnancies, but rather, to usher as many women as possible into motherhood.