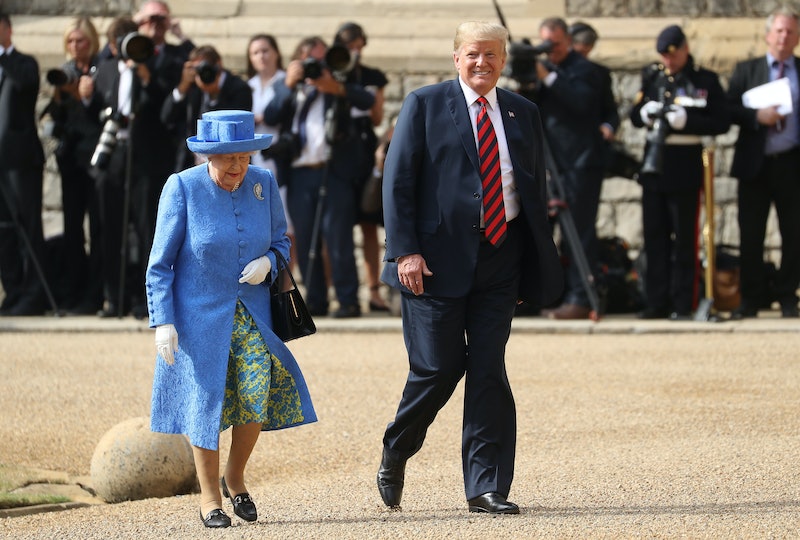 All eyes were on England on Friday as President Trump met Queen Elizabeth II for the first time. As expected, it was a formal event, and Bustle spoke to experts who gave some insights into Trump and Queen Elizabeth's body language during their meeting.

"So many times, the encounter is the story," Christopher Ulrich, body language expert and founder of CU in the Moment, tells Bustle, referring to the numerous times when Trump's faux pas with world leaders have made headlines. But with this meeting, Ulrich says that the takeaway is "all the things he doesn't do that we're used to seeing him do."

Experts noted many instances in which their body language seemed to indicate that the queen was the one controlling the situation, with Trump uncharacteristically deferring to her. Ulrich calls her "very much the guiding light in this."

The event took place at Windsor Castle, the queen's official residence, in the middle of the second day of Trump's U.K. trip. Although he was only expected to meet the queen for a short time before heading to Scotland, many were still eager to watch their interaction, which, as CNN put it, threw "one of the world's most unscripted leaders into a situation full of convention and tradition."

The ceremony began when Donald and Melania Trump got out of a black Range Rover and ascended the steps of a small covered stage set up on the Windsor lawn. The group shook hands and spoke briefly before posing for a photo together.

"His shoulders were rounded, and he tipped his head slightly to the right as he conversed briefly with the queen," notes Nick Morgan, a body language coach and consultant. "Both of these can be signs of deference — an unusual body language expression for Mr. Trump."

Ulrich agrees. "It's very much her show," he tells Bustle. "The queen has a tendency — she did this with Obama — where she will point you where she wants you, almost directs. When we point our finger at somebody it can be seen as lecturing, but it's not that at all." Instead, he says, it's her means of asserting polite control over the situation.

"He didn't do his 'pull,'" notes Ruth Sherman, a public speaking and communications expert. "That's when he asserts dominance by pulling the other 'shaker' toward him. He was likely told he'd better not do that."

Ulrich makes the same observation. "He doesn't grab her hand and do this kind of traditional thing that he does with many world leaders, kind of grab and pull in," Ulrich says, and points out that the queen is the one who "initiates" the shake.

"Europeans usually do one shake," Sherman explains, while "Americans usually do several." According to her, "When Trump shook hand with the queen, it was a typical European shake, yet when he shook hands with he other people, it was multiple shakes. It's difficult to tell who initiated that."

Many observers will have been paying special attention to the handshake. "We are used to Trump's very heavy-handed handshakes," British reporter Rhiannon Mills told The Daily Express before the meeting.

After the photo op, which lasted for about a minute and a half, a member of the Queen's Guard escorted Trump and the queen over to "review" the soldiers.

What occurred then was a "moment of brief hilarity," as Morgan calls it, when Trump seemed unsure of where to go as the queen attempted to direct him down the aisle. He even walked in front of her for a moment, but she quickly moved around him and took her place next to him. "I actually laughed when I saw this," Sherman says.

Ulrich argues that this moment isn't more than a minor and normal misstep. "That would just be an awkward moment, that's fodder for late-night TV," he tells Bustle. Such instances "happen, not just to Trump."

After they recovered from the moment, Trump again followed the queen's lead. Ulrich says that he's "letting her set the pace," while Sherman notes that "he's used to walking faster."

Overall: Respect And No Big Mistakes

"They're all respectful of each other, all the way through," Ulrich says. He adds, "For someone who does not always demure to others, [Trump] is very respectful of her."

Sherman argues that the president's controlled demeanor shows that he's learned from past visits with foreign leaders. "Trump seems to have internalized some of the advice he must have received," she tells Bustle.

Something about meeting royalty may have encouraged him to be on his best behavior. "My general read is that he was excited to meet the queen, and felt a little humbled to do so," says Morgan.

"The queen is very different than a political head of state," Sherman tells Bustle. "There are certain behaviors she will not tolerate and she is beloved by her people and they would not tolerate it, either. Trump seems aware the world is watching and judging."