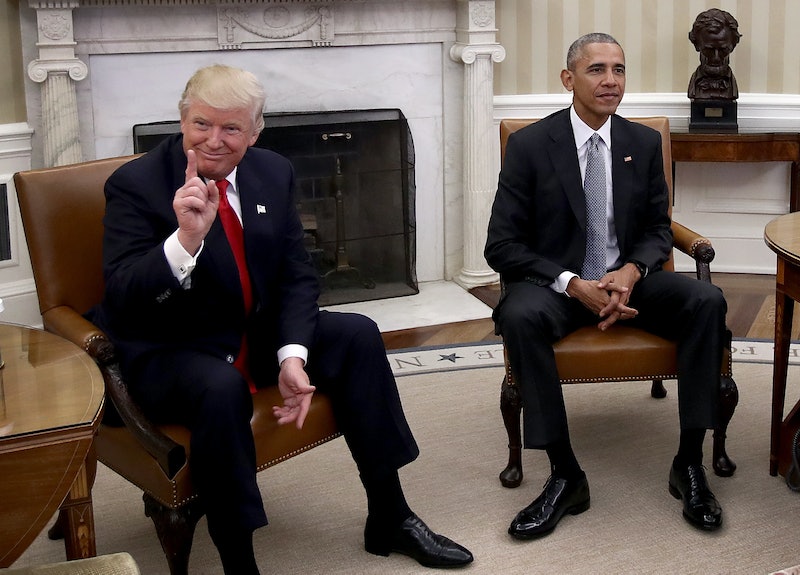 You can learn a lot about a person based on how they comport themselves in a public setting — and what could be more public than a presidential press conference? Presidents Barack Obama and Donald Trump have given their fair share of those, and they tend to act very differently in front of all those cameras. Unsurprisingly, Trump and Obama's body language during press conferences reveals a lot about the two men and how they might see their respective roles as president, according to body language specialists Bustle spoke to.

"There's a huge difference between Obama and Trump. I think it starts with their tone," body language expert Traci Brown tells Bustle. "Obama is for the most part controlled and conveying info. Trump comes across as combative from the first words he says every time he gets on stage. And body language reflects that for both of them as well."

While every presidential press conference has to address a different set of issues, watching clips of several of them show both Obama and Trump maintain their own specific style whenever they appear in front of the White House press corps. According to Brown, their respective styles are as different as the policies that they back.

"These two couldn't be farther apart in terms of their demeanor and agenda when they get behind the mic," Brown says.

Take Obama's first press conference as president, for example. As body language expert Christopher Ulrich tells Bustle, he displays all the signs of a confident leader even just when he walks in.

"When he walks into a room…there’s this kind of swagger, a kind of confidence, a lot of movement in how he walks," Ulrich says. "You see that a lot in confident leaders."

In contrasting the two presidents, both Brown and Ulrich emphasize Obama's tendency to keep his gestures contained within the frame of his body as an important element of his speaking style and calm, reserved demeanor.

"When Obama does gesture, he does kind of a precision point," Ulrich says. "It’s almost like he’s shooting a dart and trying to hit the bullseye with his answer, kind of threading it. It’s very confident."

Even when he's asked a potentially contentious question — like around the 18-minute mark in his first press conference, when a reporter questioned his commitment to bipartisanship — Obama responded in a measured way, relying on the facts of the situation.

As Ulrich notes, though, Obama turns up at his final presidential press conference as a somewhat changed man.

"He’s relaxed, he’s at ease, he’s a much different president than he was [on] day one." Ulrich says. He adds that Obama was a "little beat up," and "turned in a little bit after eight years," pointing to his shoulders turning inward as an example.

Trump, on the other hand, tends to start his press conferences out on a notably different foot.

"The first words Trump usually says are either about how great he is or how bad someone else is," according to Brown. His body language, Brown adds, largely falls in line with words like that.

"Trump's arms and hands are everywhere, making him seem bigger and more threatening," she says.

According to Ulrich, Trump's big gestures are part of his rhetorical strategy. "The more gesticulation you do, the more you keep people’s attention," Ulrich says. "He uses visual gesticulation a lot to reinforce his messages…and he’s pretty good at it."

In the press conference when Trump and CNN's Jim Acosta got into a verbal battle that ended up with the White House temporarily revoking Acosta's press pass, Ulrich explains how Trump used body language to boost his verbal attack.

"When he shuts you down…he literally points at you," Ulrich said, referencing Trump's first gesture at Acosta. Ulrich also notes how Trump's face displayed flashes of, as he says, contempt, disgust, and anger during the exchange — emotions that he says Obama worked not to display during press conferences. During the exchange, Trump walked away from the podium and then came back, which Ulrich says was additional preparation for a verbal attack.

Trump also has telltale signs of when he's on the defensive or when he's making a false statement, which turn up frequently in his press conferences, according to Brown. The big movements of his arms, she says, are what he does when he's on offense.

"When he’s lying ... he’ll cross his arms real tight," Brown says. "He kind of puffs his upper lip out a little bit."

As if their policies and governing styles weren't different enough, now you can see how different even their body language is when they're addressing the press. This change in style, as Brown points out, is what enough people voted for in 2016 — and who knows what they'll go for next.

"The pendulum swings," she says. "And this is just a really big one."