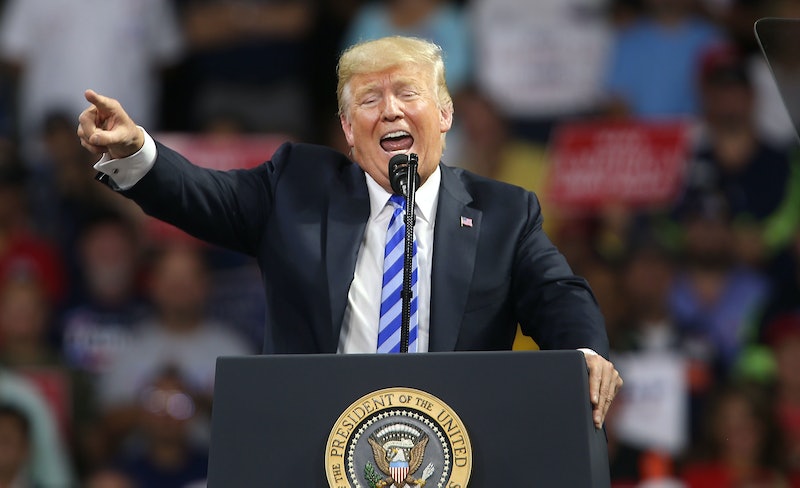 As the government shutdown approaches its third week, President Trump will give a primetime address from the Oval Office about what he called the "National Security crisis on our Southern Border" in a tweet. However, experts tell Bustle that Trump's "border crisis" claim isn't true — and that if there is any immigration crisis in the U.S., it's caused by the president's own policies.

"Any 'crisis' is of this administration’s own making," UCLA law professor Jennifer Chacón tells Bustle. "Attempted border crossings along the Southern Border are at 30+ year lows — consistent with patterns that have emerged over the past decade. Net migration from Mexico is negative — with more Mexicans leaving than coming into the country every year for several years running."

Chacón says that although many Central Americans have been displaced by violence in their home countries, such migrants are "generally are turning themselves in at the border and requesting asylum."

Although Trump has characterized activity at the U.S.-Mexico border as a "crisis," neither he nor his administration has ever defined what precisely he means by that. Bustle has reached out to the White House for clarification on his "border crisis" claim.

Several Central American countries have extremely high rates of violence and sexual assault. El Salvador, Honduras and Guatemala — sometimes referred to as the "Northern Triangle" — regularly make lists of the most violent countries in the world, and many migrants from these regions come to the U.S. to seek refuge.

But Trump and his administration have focused instead on the supposed threat that such migrants pose. Border troops used tear gas against a group of migrants at the border in November, and according to NBC News, 22 migrants have died in U.S. detention centers over the past two years, including two children in the month of December alone.

"What past border build-up efforts have done is drive migrants to take more dangerous routes across the desert to enter the US, leading directly to thousands of deaths," Angélica Cházaro, assistant law professor at the University of Washington, says. "The government's focus should be on halting the preventable deaths of migrants, not fortifying the border against an imaginary enemy."

Although Trump has never said what specifically constitutes a "border crisis," he hinted recently that he is referring to terrorism.

"The border is a much more dangerous problem. It's a problem of national security. It's a problem of terrorists," Trump said Friday at the White House. "They find it's the easiest place to come through. They drive right in and make a left. It's not going to happen."

None of the available data, however, shows that there is a crisis of suspected terrorists trying to cross the southern border.

On Friday, White House Press Secretary Sarah Huckabee Sanders offered a supposed statistic to support Trump's claim of a crisis at the border: "Nearly 4,000 known or suspected terrorists," Sanders told Fox and Friends, "came across our southern border" in 2018 and were apprehended by border agents. Various other high-ranking officials, including Vice President Mike Pence and Homeland Security Secretary Kirstjen Nielsen, have also stated or suggested that thousands of terrorists have been stopped trying to cross into the U.S. from Mexico.

But although full immigration data from 2018 isn't yet available, Sanders' claim is incorrect. Data obtained by NBC News showed that only six immigrants in the U.S. government's "terrorist database" were stopped at the border during the first half of 2018. And in its most recent annual report, the State Department found "no credible evidence indicating that international terrorist groups have established bases in Mexico, worked with Mexican drug cartels, or sent operatives via Mexico into the United States." The administration later called Sanders' claim an "unfortunate misstatement."

At other times, Trump has suggested that immigrants who come to the U.S. through the southern border are "bringing crime" into the country at unprecedented or dangerous rates. This is demonstrably untrue, however, as study after study has found that immigrants commit less crimes than native-born Americans.

"I cannot agree with the president that there is a 'crisis' at the U.S.-Mexico border — except insofar as he himself is a walking crisis for the border," Chacón says.