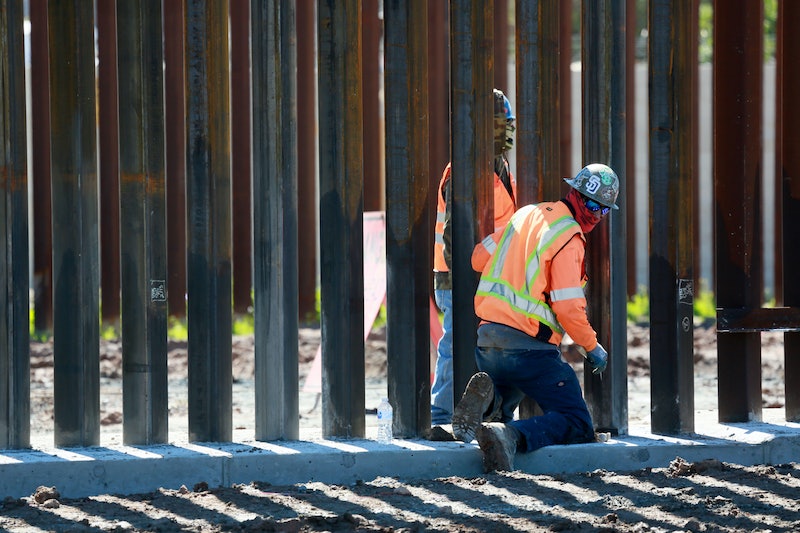 On February 15, President Donald Trump declared a national emergency to fund construction of a southern border wall. Nearly a month after making this declaration, Trump's border wall progress is perhaps not what you'd expect. As it turns out, the Department of Homeland Security (DHS) reportedly hasn't yet submitted a border wall project plan to the Department of Defense (DOD), which means that the wall's progress has been limited, HuffPost reported. Bustle reached out to the White House for comment on the matter, but has not yet received a reply.

As the HuffPost noted, Trump's emergency declaration means that he can divert money from several executive agencies, including the DOD, to fund the wall's construction. However, in order to initiate the fund transfer from the Department of Defense, the Department of Homeland Security needs to make a request for these funds by outlining the type of wall-related projects for which the funds will be used. This wall project plan has reportedly not yet been submitted to the DOD, the HuffPost reported.

A Pentagon source further told the outlet that, "Once DHS provides a list of the projects they request assistance on, the secretary will determine if DOD can support." The HuffPost source added, "If DOD supports, then we’ll be able to start construction.” As CNN noted on Feb. 23, the Secretary of Defense is legally required to decide whether military construction funds requested for the border wall will be used to support the armed forces deployed as part of the national emergency. If the secretary deems that the funds will be used in this way, then allocation of military construction funds for the border wall will likely proceed, CNN noted.

The outlet also reported at the time that, once the DHS request is received, it still could take quite some time for the DOD to move forward with wall construction. As a senior defense official told the outlet:

As the Washington Post highlighted, this reallocation of military construction funds would account for $3.6 billion of Trump's emergency wall funding. Trump also hopes to use $2.5 billion from the Department of Defense's counter-drug support activities, $600 million from a drug forfeiture fund at the Treasury Department, and $1.375 billion allocated by Congress in the last spending bill to further fund the wall, the outlet noted. In his 2019 budget, Trump has also requested an additional $8.6 billion to complete his wall funding package, Vox reported. Though, as Reuters noted, this amount is unlikely to be approved by Congress, as Democrats (and some Republicans) have repeatedly pushed back against funding a border wall.

Trump is currently facing several lawsuits, along with a congressional challenge, to his emergency declaration, Politico reported. While it's possible that Congress will soon pass legislation blocking his declaration, Trump has the power to veto this action — and Congress probably doesn't have enough votes for a veto override, the New York Times noted. The aforementioned lawsuits are still moving through the court system, Fortune reported.

Overall, it's clear that many steps need to be taken before Trump can proceed with emergency-funded border wall projects. It remains to be seen how the Department of Homeland Security and the Department of Defense will address the matter in the coming weeks.