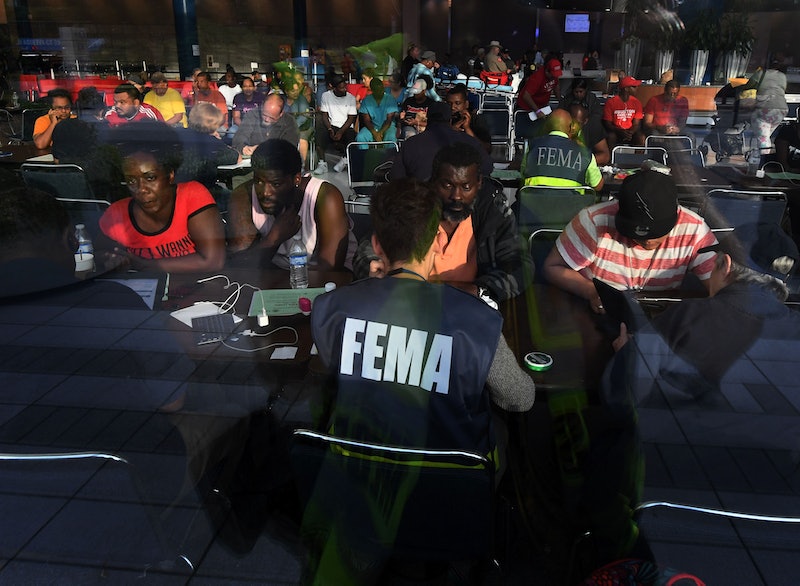 If you were hoping that Hurricane Harvey would bring about a change of heart in terms of FEMA funding in President Trump's budget proposal, keep hoping. Despite the unprecedented nature of the disaster facing the Gulf Coast at the moment, Trump hasn't backtracked his budget proposal that strips FEMA funding — nor has Congress publicly stepped away from an idea of taking funds from FEMA's budget in order to pay for Trump's border wall.

When Trump submitted his budget proposal (or, as he called it, a "budget blueprint to make America great again") back in the spring, it included $667 million in cuts to FEMA's state and local grants. The grant program that would lose the most is the Pre-Disaster Mitigation Grant Program, which aims to help cities and regions prepare themselves at the local level and thereby reduce federal spending afterwards. They work quite well — according to their records, each dollar spent saves the federal government $4 in disaster relief spending.

Another area subject to proposed cuts is FEMA's National Flood Insurance Program, which allows people to buy the normally exorbitantly expensive flood insurance at a reasonable price. The program is currently in debt after Katrina, and it's going to have to keep borrowing in order to cover the claims that will roll in in Harvey's aftermath. If Congress doesn't reauthorize the program — against the president's expressed wishes — then it would be unable to borrow money and keep its work going.

It is relevant to note that Trump made these budget recommendations over a year after research came out suggesting that Houston was a "sitting duck" for a major hurricane. Since the disaster struck, Trump has visited Texas and spoken to people awaiting relief, but his promises to "do [disaster relief] better than ever before" and that Texas and Louisiana would "be bigger, better, stronger than ever before" have not come with any specific policy directives.

Congress hasn't said that it's not still considering slashing $876 million out of FEMA's budget to pay for the wall. They could yet pass an emergency spending bill to fund disaster relief, which will almost certainly be necessary given the enormous task that FEMA currently has on its hands. Trump also promised "very rapid action from Congress — certainly from the President" regarding an emergency spending bill, but again, that offers no specifics on what he or Republican Congressional leaders plan to do.

As the world moves into an era of more frequent severe storms caused by climate change, the Trump administration is clearly not looking out for long-term concerns, even now that Harvey has hit. The proposed budget also included a $62 million cut from the National Weather Service, and the EPA has criticized climate scientists for "politicizing" the disaster by linking it to climate change.

In his speech in Texas, Trump expressed hopes that the country would come together around Harvey's victims — but he could begin by making absolutely sure that the federal government is providing for those victims.