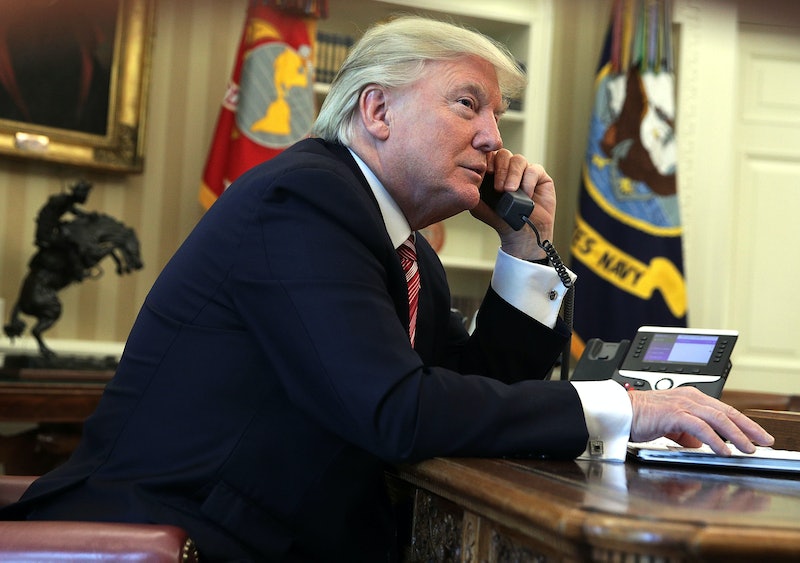 Those Oval Office phone calls are reportedly about to get as off-the-record as you can get. According to CNN, the White House will stop publishing official summaries of the president's phone chats with foreign leaders. This means that Trump's calls with world leaders, like Russia's Vladimir Putin, could get even more secretive than they already are.

As is presidential practice, the commander-in-chief's calls are usually documented. Official descriptions of the president's calls with overseas officials are called "readouts" in Washington jargon, and the summaries of political conversation at the highest level give administrations the ability to shape the diplomacy between countries, according to CNN. The practice, which has been a precisely-planned, national security event in the past, was common to both Republican and Democratic presidents. As CNN reported, it's not clear if the suspension is only for the time being or permanent.

According to CNN, the last phone call with a world leader that was documented was when Trump called the Hungarian prime minister to congratulate him on his re-election win, but even then, the readout was vague: "The two leaders further pledged to keep United States-Hungary relations strong," the readout noted.

That call was toward the middle of June; since then, the Trump administration has not released a readout of calls between Trump and other world leaders, though as CNN revealed, Trump has had at least two calls with other leaders over the past couple of weeks, including Turkish President Recep Tayyip Erdogan and Israeli Prime Minister Benjamin Netanyahu. After those calls were reported on by foreign news outlets, the White House confirmed that they happened but would not detail anything that was discussed between Trump and those leaders.

Trump has a history of holding meetings that are left off his presidential schedule and under the radar from reporters, like the time he reportedly met with former Colombian presidents or the other time he held an undisclosed meeting with Putin at the G20 summit. Trump also had a one-on-one meeting with Kim Jong Un back in June.

Documenting these phone calls are crucial for a couple reasons, according to former government officials, and one of those is transparency. There is a public interest in knowing who the nation's most powerful elected official is talking to and what they talked about. The other is that readouts can help maintain control of the perception on an issue; if the United States skips the official note-taking, then other countries' narratives can take over.

A prime example of starkly different accounts between world leaders can be found in Trump's call with Canadian Prime Minister Justin Trudeau from April of 2017. After the two spoke, the summaries that came out from each country left many wondering if the two leaders were even in the same conversation. According to The Huffington Post, the White House's version was non-eventful, reading, "President Donald J. Trump and Prime Minister Justin Trudeau spoke today. The two leaders discussed the dairy trade in Wisconsin, New York State, and various other places. It was a very amicable call."

But Canada's notes on the call were anything but amicable. It had read, "The prime minister and the President reaffirmed the importance of the mutually beneficial Canada-US trade relationship. On the issue of softwood lumber, the prime minister refuted the baseless allegations by the US Department of Commerce and the decision to impose unfair duties."

This latest decision to stop the public documentation of high-level phone calls comes on the heels of a controversial meeting that President Trump had with Putin earlier this month. The closed-door one-on-one has drawn scorn from both the GOP and Democrats alike, with the president's own director of intelligence admitting he has no idea what happened in the private talk between the world leaders.