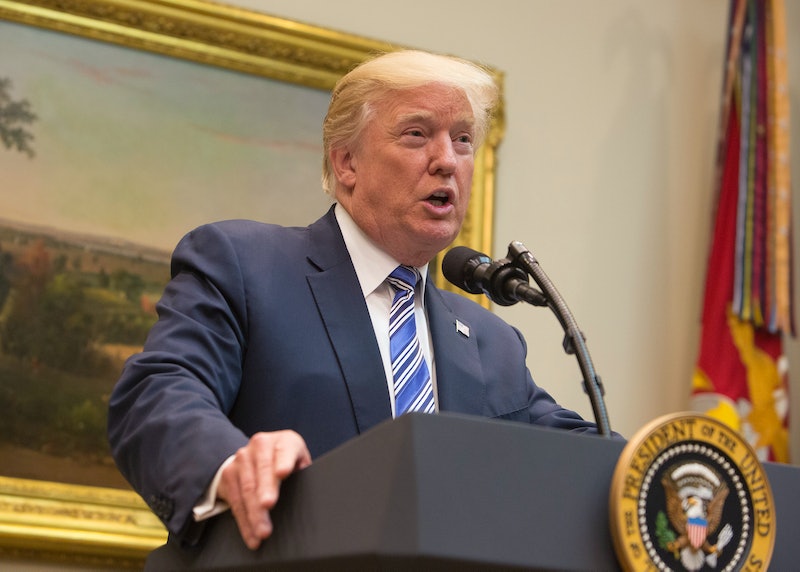 Several days after violent protest erupted in Charlottesville, VA, President Donald Trump specifically denounced white supremacist groups Monday in a speech at the White House. White nationalist protestors gathered in Virginia over the weekend to oppose the removal of Confederate Gen. Robert E. Lee's statue from its home in Charlottesville. In previous statements, Trump had blamed "many" sides for violence during the clash.

But on Monday, Trump finally acknowledged the role of racism and white supremacist groups in the protests. According to the New York Times, Trump told reporters, "Racism is evil. And those who cause violence in its name are criminals and thugs, including the KKK, neo-Nazis, white supremacists and other hate groups that are repugnant to everything we hold dear as Americans."

Trump's original comments drew criticism from Democrats and Republicans as not specific enough in condemning the violence enacted in the name of racism and terrorism. On Saturday, a car rammed into a group of counter protesters, killing a 32-year-old woman, Healther Heyer. While Trump referred to the events in Charlottesville as "sad" on Twitter, his National Security Advisor on Sunday seemed to contradict the President's neutral tone when Gen. H.R. McMaster called the deadly car attack terrorism.

On Monday, Trump's full remarks about the Charlottesville protests began with some words about the economy and jobs, highlighting his administration's accomplishments, before speaking about the issue at hand in Virginia. According to TIME Magazine, Trump said,

We are renegotiating trade deals and making them good for the American worker and it’s about time. Our economy is now strong. The stock market continues to hit record highs. Unemployment is at a 16-year low and businesses are more optimistic than ever before. Companies are moving back to the United States and bringing many thousands of jobs with them. We have already created over 1 million jobs since I took office. We will be discussing economic issues in greater detail later this afternoon, but based on the events that took place in Charlottesville over the weekend, I would like to provide the nation with an update on the ongoing federal response to the horrific attack and violence that was witnessed by everyone.

I just met with FBI Director Christopher Wray and Attorney General Jeff Sessions. The Department of Justice has opened a civil rights investigation into the deadly car attack that killed one innocent American and wounded 20 others. To anyone who acted criminally in this weekend’s racist violence, you will be held fully accountable. Justice will be delivered. As I said on Saturday, we condemn in the strongest possible terms this egregious display of hatred, bigotry and violence. It has no place in America. And as I have said many times before, no matter the color of our skin, we all live under the same laws, we all salute the same great flag and we are all made by the same almighty God.

We must love each other, show affection for each other and unite together in condemnation of hatred, bigotry and violence. We must rediscover the bonds of love and loyalty that bring us together as Americans.

Racism is evil and those who cause violence in its name are criminals and thugs including the KKK, neo Nazis, white supremacists and other hate groups that are repugnant to everything we hold dear as Americans.

Those who spread violence in the name of bigotry strike at the very core of America. Two days ago, a young American woman, Heather Heyer, was tragically killed. Her death fills us with grief and we send her family our thoughts, our prayers and our love. We also mourn the two Virginia state troopers who died in service to their community, their commonwealth and their country.

Troopers Jay Cullen and Burke bates exemplify the very best of America, and our hearts go out to their family, their friends and every member of American law enforcement. These three fallen Americans embody the goodness and decency of our nation.

In times such as these America has always shown its true character, responding to hate with love, division with unity and violence with an unwavering resolve for justice.

As a candidate, I promised to restore law and order to our country, and our federal law enforcement agencies are following through on that pledge.

We will spare no resource in fighting so that every American child can grow up free from violence and fear. We will defend and protect the sacred rights of all Americans, and we will work together so that every citizen in this blessed land is free to follow their dreams in their hearts and to express the love and joy in their souls. Thank you, God bless you and God bless America. Thank you very much.

Trump then exited the room without taking questions from reporters. While some were angry that he did not call out the alt-right for their role in Charlottesville from the beginning, Trump finally denounced them in his speech.