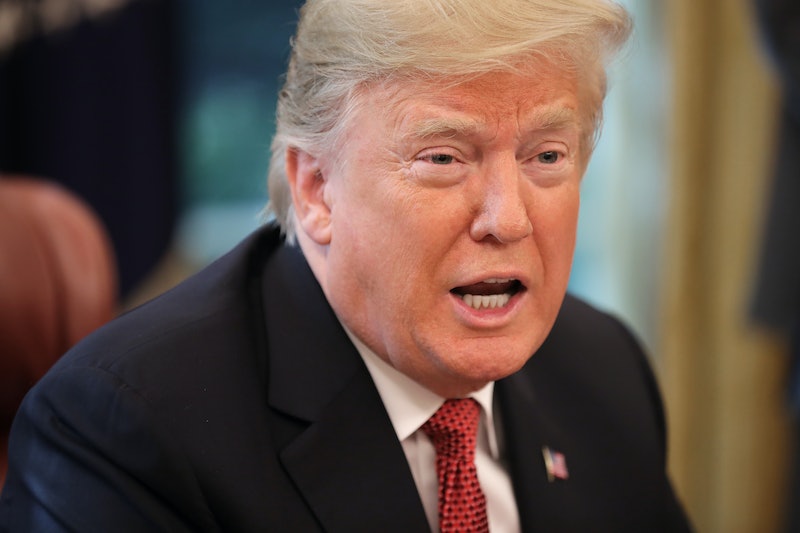 Some news for house hunters: President Donald Trump's childhood home in Queens is up for sale, according to The Wall Street Journal on Tuesday. Located in the Jamaica Estates neighborhood, the property is currently on the market for a whopping $2.9 million — a rate considerably higher than the premiums other nearby houses are seeking, The Journal reported.

Real estate agent Edward Hickey told The Journal that the sale would be conducted through a "low-key" process where interested buyers are welcome to make their offers, as long as they could prove they had the funds to buy the Tudor-style house. "One of the reasons we’re doing it the way we are is to prevent a circus atmosphere," Hickey told The Journal. "We anticipate that there will be a lot of curiosity."

The house was sold at a lower rate of $2.1 million in 2017. The Journal reported that a house across from Trump's previous childhood home is also up for sale at $1.25 million. Another house, just a block away, was sold for more than $640,000, in 2016, according to the public records that the newspaper reportedly reviewed.

Hickey also told The Journal that although it is no longer up for rent, the house was once on the popular AirBnB website for an eyebrow-raising $700 per night.

The Journal reported that the president grew up in the house until the age of 4, then moved to the nearby Midland Parkway in Queens where his father bought a larger house.

According to the architecture and interior design website, 6sqft, Trump's childhood home in Jamaica Estates has six bedrooms and was built in 1940. Covering some 2,000 square feet, the president's old home has a patio, lounge, dining area, a driveway that can squeeze in five cars, a spacious garage, and a host of other features. For many New Yorkers who are used to remarkably small living spaces, the house on Wareham Place may sound like a palace.

In 2016, Trump's childhood home was on the market as well, asking for $1.65 million at the time. Listing agent Howard Kaminowitz told DNAinfo, "It's a really nice house. And it's probably the least expensive Tudor in Jamaica Estates now."

The Guardian reported in 2017 that Trump's childhood house also had certain decoration features that may strike some people as pretty odd, like a photo of a large-sized cut-out of Trump in the lounge of his old home. Then there's reportedly an Andy Warhol-inspired portrait of him in another room.

But these features may have added to the previous hype the listing had on Airbnb. When the offer went up on the website two years ago, The Guardian noted that the blurb for the listing boasted: "In 1946, Donald Trump was born to Fred and Mary Trump, and brought home to Jamaica Estates. Here they lived, in a home built by Fred himself. This is their home."

The house is part of presidential history, and while real estate agents are interested in finding a buyer, some neighbors don't seem so happy. Deborah Ayala-Braun told The Guardian in 2017 that the public attention around the house was "creating havoc and chaos."

"I thought maybe it was going to be a museum," Ayala-Braun lamented.