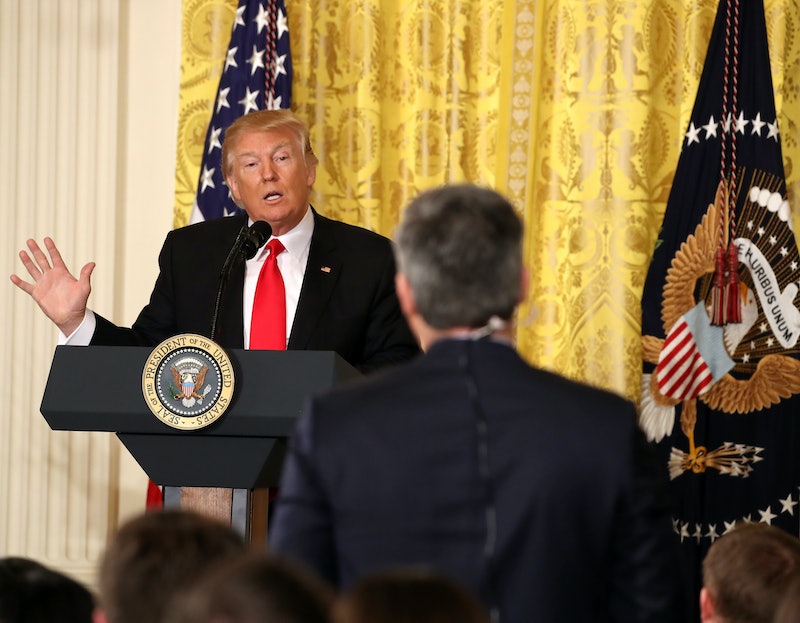 After several brief pressers with foreign leaders in the past few weeks President Donald Trump held his first extended press conference in the White House on Thursday, as part of his announcement of his replacement nominee for Labor Secretary, Alexander Acosta. While Acosta's nomination was the ostensible topic of the press conference, most of it ended up focusing on Trump's favorite topic — people in the media he personally doesn't like.

Trump also faced questions on one of the most important issues of the past few days — the resignation of Michael Flynn, who had been his National Security Advisor. Communication from the White House muddled the reasoning behind Flynn's ouster — they insist that Flynn's calls with Russia's ambassador during the transition were totally fine, but that he was fired for losing the administrations' trust on the issue.

The president's press conference, if anything, made Flynn's departure from the administration even more confusing. President Trump said that Flynn was treated very unfairly by the media, and regretted him leaving, saying that his calls to Russia were totally allowed. But he also said that he was fired for lying to Vice President Mike Pence, implying that Pence really did do something wrong, beyond being the victim of a supposed media attack.

"He didn't tell the vice president of the United States the facts and then he didn't remember and that's just not acceptable," Trump said of his former National Security Advisor.

There are several aspects of this that leave me confused. If Trump saw Flynn's calls to Russia discussing sanctions as being totally fine, why was there such a concerted effort by the Trump administration to reassure Americans that he wasn't discussing sanctions, including the appearance by Pence on Face the Nation that we now know Flynn misled him about?

If what Flynn did was fine with Trump, why was he fired? Trump said that he was fired for misleading the vice president, but that's strange considering that we know that the Justice Department informed the White House of Flynn's falsehoods weeks before he eventually left his post. It leads one to wonder about whether he was asked to resign not for lying to the vice president, but only because people outside the White House found out that he was lying.

And on the most important question left over from the Flynn fiasco, whether the Trump campaign coordinated with the Russian government as they performed espionage against Trump's campaign opponents, Trump remains vague in a way that is certainly not reassuring, especially considering Trump's relentless defenses of Vladimir Putin's human rights abuses.

With recent (and notably vague) reports that the FBI believes members of the Trump campaign were in contact with the Russian government, this question will not go away. And despite Trump speaking to the press and answering questions in the most open way he has since becoming president, the questions have only grown after the press conference.