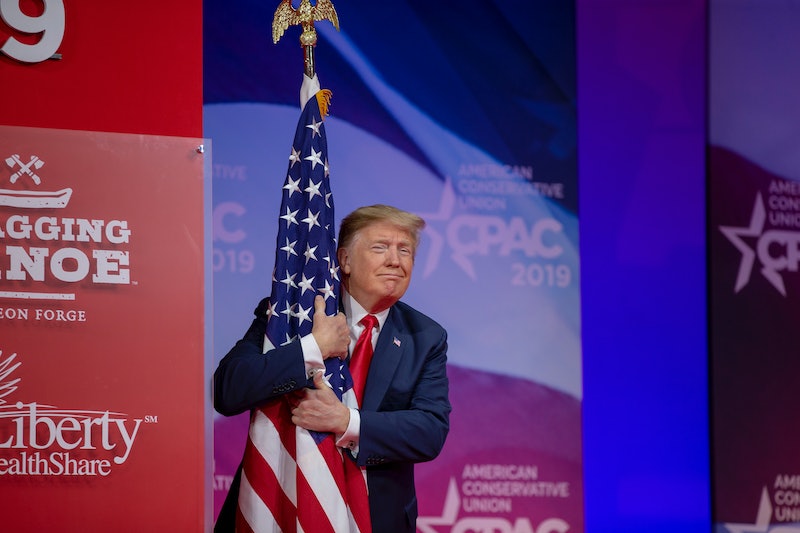 President Donald Trump didn't hold back in his Saturday speech to the Conservative Political Action Conference. Trump's CPAC speech was the longest of his presidency, and he tore into subjects including the "Crooked Hillary," the Russia investigation, and free speech on college campuses, according to NBC News. At one point the crowd chanted "Lock her up!" and Trump hugged the American flag standing on stage next to him. It was a wild ride.

About 10 minutes into his speech, The Atlantic reported that he went totally off-script — and he praised himself for it:

In addition to his usual attacks on Robert Mueller's probe, Trump also went after a number of Democratic lawmakers. He called Hawaii Sen. Mazie Hirono "crazy," and referenced comments she made after the allegations against then-Supreme Court nominee Brett Kavanaugh came to light. “Guess who is perpetrating all of these kinds of actions? It’s the men in this country,” Hirono said in September, according to The Hill. “I just want to say to the men in this country: Just shut up and step up. Do the right thing, for a change.”

During his CPAC speech, Trump said of Hirono, according to The Hill, “The crazy female senator from the state of Ohio" — he later corrected himself and said Hawaii — “She’s like a crazed person. What she said about men is so bad.”

He also went after Rep. Alexandria Ocasio-Cortez and the Green New Deal, calling the freshman representative a "lunatic," according to The Atlantic:

He also said he wished he would've waited to refer to Sen. Elizabeth Warren as "Pocahontas" until 2020, when she will likely be running for president. He said, according to NBC News:

I should've saved the Pocahontas thing for another year because I’ve destroyed her political career and now I won't get a chance to run against her and I would've loved it,” Trump told the crowd. “I don’t want to knock out all the good stuff and end up with somebody that’s actually got talent.

He also criticized former Attorney General Jeff Sessions' decision to recuse himself from the Justice Department's investigation into whether the Trump campaign colluded with Russia while mocking Sessions' southern accent. “And the attorney general says ‘I’m gonna recuse myself,’" Trump said during his speech, according to The Hill. The crowd booed.

When Trump came on stage he also hugged the American flag while "God Bless the USA" played over the speakers.

It was definitely a wild — and lengthy — ride, and Twitter had some jokes and criticisms. Roland Scahill wrote, "Trump’s CPAC speech is longer than his first two marriages."

Rep. James P. McGovern, Chairman of the House Rules Committee, retweeted an NBC article with the title "Trump lets loose at CPAC in longest speech of his presidency," and wrote, "'lets loose' = has delusional meltdown."

At least one thing is clear: it didn't appear that anything or anyone was left out of Trump's speech. To watch the full speech, click here.