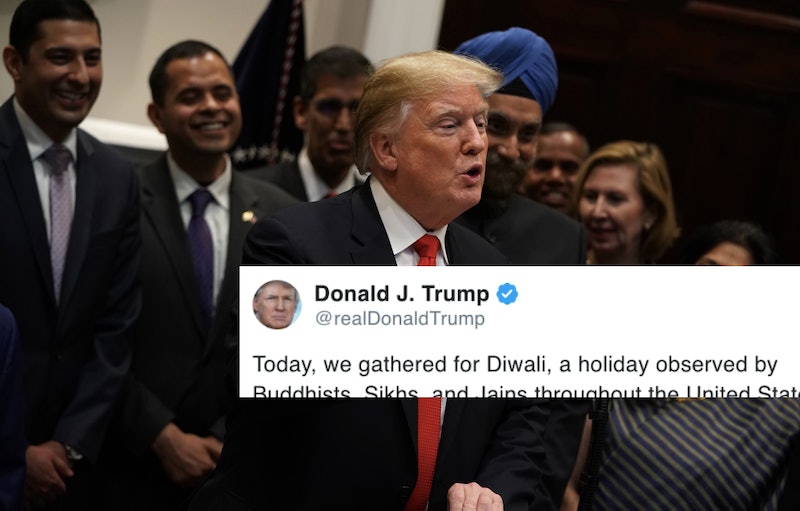 On Tuesday, President Trump celebrated the Hindu festival of lights, otherwise known as Diwali. In a tweet about the celebration, Trump mentioned the "Buddhists, Sikhs, and Jains" who celebrated the festival, and failed to acknowledge Hindus — for whom Diwali is one of the most popular festivals. It was the second tweet about Diwali that omitted Hindus; the first one was deleted, according to The Hill. Bustle has reached out to the White House for comment.

In another tweet posted several minutes later on the same day, Trump said, "It was my great honor to host a celebration of Diwali, the Hindu Festival of Lights, in the Roosevelt Room at the @WhiteHouse this afternoon. Very, very special people!"

At the Diwali event, the president said to his audience, "Our nation is blessed to be home to millions of hardworking citizens of Indian and southeast Asian heritage, who enrich our country in countless ways. Together we are one proud American family." Trump also touched upon economic ties between the United States and India during his remarks.

He added, "I'm grateful to have numerous Americans of Indian and southeast Asian heritage who fulfill critical roles across my administration, and they've done an incredible job." On Twitter, however, people couldn't help but notice that Hindus were not mentioned in Trump's initial tweets. CNN's executive editor, Ram Ramgopal, tweeted, "Um, hundreds of millions of Hindus, too."

The BBC's Ashita Nagesh tweeted about the Trump Diwali tweet saga saying that "[Trump] sent a Diwali tweet missing out Hindus, got called out, deleted it, then reposted a new Diwali tweet, which also missed out Hindus." It looks like Trump's third "very, very special people" tweet did the charm.

New York Times writer Sopan Deb jested, "Come on. How do you screw up a Diwali tweet by leaving out Hindus? And then delete it and then fix it by reposting THE SAME THING?"

It's worth mentioning that celebrations for Diwali began on Nov. 7 while the White House celebrated it on Nov. 13. The president was joined by prominent Indian Americans such as Federal Communications Commission Chairman Ajit Pai and White House Deputy Press Secretary Raj Shah.

Trump seemed to have a grasp over what Diwali meant to to those who celebrated it. "This ceremony signifies the triumph of light over darkness and good over evil," Trump said while reading prepared comments. "It is a jubilant occasion that brings loved ones, neighbors, and communities closer together. And these shining lights remind us to seek wisdom, to give thanks, and to always cherish and love the ones who grace our lives."

In response to Trump's remarks, Pai thanked him and said that his parents' "journey" to the United States was shared by many others in the country. "To celebrate that here at [the] White House today is a tremendous honor, with you," Pai said. On Twitter, though, people couldn't get over the president's several attempts at getting the Diwali greeting right.