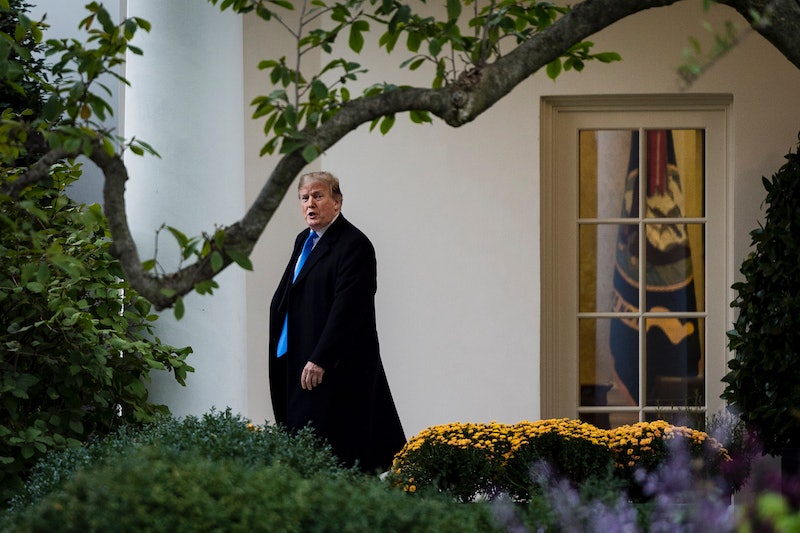 It's fascinating to get a glimpse at the schedule of any American president, if only because he's one of the most powerful people on the planet. With President Donald Trump, though, it's especially interesting, just because so many hours reportedly go under the unexplained label of "Executive Time." While officials give conflicting reports on what exactly the president's time goes to, Trump's "Executive Time" is where many of his tweets are likely coming from.

Last Tuesday, Trump's schedule included more than nine hours of so-called Executive Time, which a new Politico report described as the unscheduled, unstructured time that often goes to calling friends, watching TV, and, of course, tweeting. Politico obtained Trump's full schedule from the week of Oct. 22 to 26, and while Tuesday's schedule included the most free time, the report emphasized that it wasn't entirely abnormal. This wasn't a slow week, either; the midterms are quickly approaching, and the country was fixated on the pipe bombs that were being sent to Trump critics in the mail.

Comparing Trump's schedule to his Twitter feed showed Politico that some of his more memorable tweets from the previous week came from what was labeled as Executive Time. For example, Trump's tweet referring to "this 'Bomb' stuff" as the cause of a Republican loss of midterm momentum came during one period of Executive Time.

Bustle has reached out to the White House regarding what the president uses this Executive Time for.

This particular quirk of Trump's schedule isn't entirely new. Back in January, Axios reported that Trump's daily schedule had been starting later — and getting shorter — in order to allow for more of this Executive Time. At the time, Axios noted that Trump often began his officially scheduled day in the Oval Office around 11 a.m. This new Politico report restated that, and added that, sometimes — like last Tuesday — his official schedule didn't begin until 1 p.m.

Until then, both of the reports stated that the president is likely to spend his time in the White House residence with the TV on — and the tweeting often comes in reaction to what he sees on TV, as numerous observers have pointed out.

Various spokespeople for Trump have claimed that Trump does indeed keep a full schedule, with one even saying in response to the January Axios report that “to describe [Trump’s] work ethic as anything other than yeomanlike is ridiculous, and everyone knows it," as the Guardian wrote. One aide told Politico that he uses the time productively, calling him a “workaholic.”

In a more detailed description of Trump's morning Executive Time, though, CNN wrote in January that much of it goes to skimming the newspapers, phone in hand, Fox News on in the background. They reported that he gets up very early after only four or five hours of sleep, and many people will have noticed that Trump's tweetstorms frequently come in the very early morning hours. Trump's tweeting does often shape the news of the day, though, so in that way it's undeniable that his Executive Time is, in fact, productive.