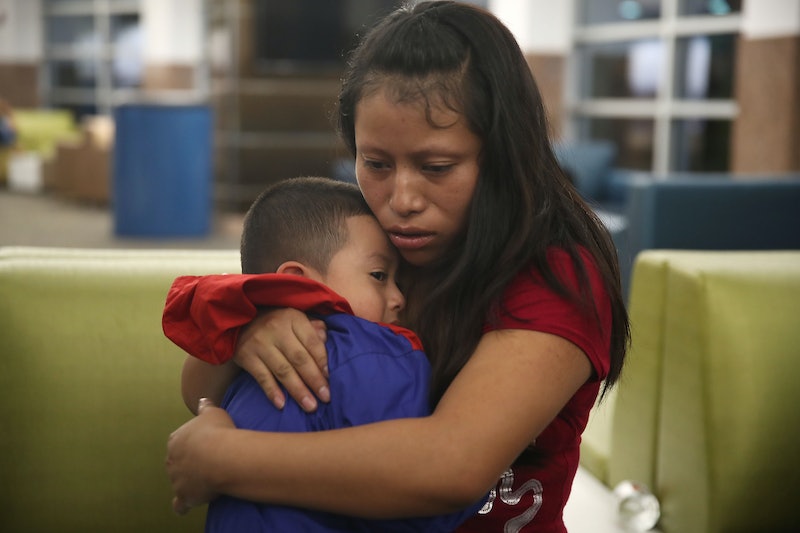 The Trump administration's "zero tolerance" policy, which resulted in thousands of children being separated from their parents at the U.S. border, ended in June following widespread condemnation. But the costs stemming from those separations still continue, and the current price tag is already absurd. Trump's family separation plan has cost $80 million — and spending will continue as the administration keeps trying to reunite more than 140 children who are still in custody.

These numbers come from a report that was obtained by The New York Times and put together by the Department of Health & Human Services. HHS was required to do so by a government funding bill that was passed recently, The Hill reported.

That makes this the first time that the costs behind the family separations — and reunifications — have ever been fully disclosed. The sum works out to about $30,000 per child that was separated. In total 2,667 kids were taken from their families, according to HHS, and each one spent about 83 days in custody.

Then there are the kids who still remain in government care. Some 117 of the more than 140 children have had their parents deported already, making the logistics of reunification even more of a challenge. And of those, the parents of at least 90 have told the government that they prefer their children stay in the U.S. rather than return home and face potential danger, The Times reported.

The vast majority of the costs came from the shelters that the kids were housed in — and that is one of the main ongoing costs for the kids still in government care. Some $59 million of the $80 million total went to shelters, with the rest of the cost spread among health care, legal representation, and other program costs.

Housing migrant children can cost anywhere from $256 to $775 per day depending on the facility. That means with 140 children still in government care, the daily cost runs from nearly $36,000 to as much as $109,000. Housing the children with their parents would have generally been much less expensive, and releasing families pending an immigration court date would have been cheaper still: to the tune of $4.50 per day per child for community supervision or electronic monitoring.

Some 11 of these children could be in detention until their parents are located; currently non-governmental organizations and volunteers have been the main groups searching for parents throughout Central America while coordinating with the federal government, The Times reported.

Rep. Rosa DeLauro of Connecticut, the ranking Democrat on the House Appropriations subcommittee that oversees the shelter spending, told The New York Times that the situation was "outrageous." "It has been at least seven months since the Trump administration began traumatizing thousands of families and they still have not fully resolved this tragedy," DeLauro told the paper.

She's not the only House Democrat who feels that way. It seems the administration could have to face examination from the House on several fronts. On Tuesday, Rep. Jerrold Nadler of New Jersey, who is the ranking Dem on the House Judiciary Committee, wrote many members of the Trump administration to say that the committee will examine the family separations and pending reunifications.

In a letter to acting Attorney General Matthew Whitaker, HHS Secretary Alex Azar, and Department of Homeland Security Secretary Kirstjen Nielsen, Nadler criticized the administration's "inconsistent" public statements on family separations and said the Dems on the committee are "increasingly worried about the well-being and safety of the children" in government care.

With a price tag of $80 million and growing, Democrats are sure to investigate the Trump policy — and members of the administration who carried it out — come January.